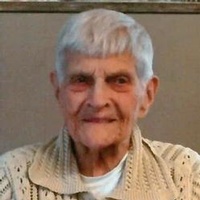 Alice Margaret Hopwood, long time resident of Buhl, passed into the arms of her husband and son, on January 16, 2017, at the Desert View Care Center.
Alice was born on August 1, 1917, in Nebraska, to Charles and Lila Fortik. She was the oldest of seven children. She met her soul mate, Dale Hopwood, at a school dance. They were married on August 8, 1934. They lived in Nebraska and Colorado before moving to Buhl in August of 1941. They lived and raised their family on the Silo Ranch in the Lucerne area of Buhl. Alice was a hard worker, always having a large garden, canning everything she could and caring for her family. She and Dale were excellent parents to a large family of nine children. Clarence (Bonnie) of Eugene, Oregon, Allen (Dorien)of Gooding, Idaho, Cecil-deceased (Joyce) of Kimberly, Idaho, Marvin (Maggie) of Vancouver, Washington, Norma Chandler of Buhl, Idaho, Jack (Carolyn) of Kimberly, Idaho, Eugene (Lou) of Twin Falls, Idaho, Carol Turner of Twin Falls, Idaho and Jerry (Linda) of Broadwater, Nebraska. Alice was also survived by sisters, Gaylene and Ethel, both of Grand Junction, Colorado. She was the proud grandmother to 35 grandchildren, 71 great grandchildren and 61 great-great grandchildren. Alice and Dale were also proud to have Jim (Linda) Schrader and Steve (Margaret) Harp as a part of their family.
Alice was preceded in death by her husband, Dale; son, Cecil; grandchildren, Jeffrey and Sharon; siblings, Floyd, Harold, Hazel and Darlene and sons-in-law, Robert Chandler and Robert Turner.
Alice and Dale were very active members of the Lucerne Grange and also the Buhl Senior Center.
In lieu of flowers, please send your donations to the Buhl Senior Center or Buhl Quick Response Unit.
The family would like to thank Dr. Nofziger for his wonderful care of Alice for the past 40 years, as well as, the staff at Desert View for the wonderful care and love that was given to her the past eight years. She loved each of them as her own.
A funeral service will be held at 11:00 a.m. on Friday, January 20, 1917 at Farmer Funeral Chapel in Buhl. There will be a viewing prior to the service. An additional memorial service will be held in July at a family reunion.

To order memorial trees or send flowers to the family in memory of Alice Hopwood, please visit our flower store.