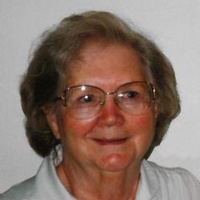 Alvalee Cope, 87, of Twin Falls, died at her home Friday morning, September 12, 2014 of lung cancer.
Alvalee was born in Hobart, Oklahoma on December 14, 1926 to parents Harrison Edmons and Celia Burgess Edmons. She was the youngest of eight children, having five brothers and two sisters.
Alvalee was three years old when her family moved to Buhl, Idaho. During the war years the family moved to Ohio, where Alvalee worked in the war plants as a gas mask inspector. They returned to Buhl when she was 17 years old.
Alvalee met Lavell Cope at Church. They were married in Twin Falls on August 12, 1946 and made their home in Buhl. They had two sons, Danny and Dewayne.
Alvalee loved to crochet and embroider. We all have beautiful pieces she has given us. Alvalee and Lavell loved to travel. After retirement they turned into "snow birds" in Yuma, Arizona. They also traveled to Alaska and Cancun, Mexico, and to the east coast.
She was a member of the Buhl Church of Christ and the Magic Valley Church of Christ in Twin Falls. She loved going to church, passing out bulletins and visiting with everyone. She was a member since 1953.
She was blessed with two grandchildren, Kevin Cope and Kelly Dickard. Plus, she has two great-grandchildren, Tyler and Bailee Cope. She loved to spoil, make things for, and play with her grand kids.
Alvalee is survived by her husband of 68 years, Lavell Cope; Son, Danny (Leaine) Cope; Grandson Kevin (Nicole) Cope; Granddaughter, Kelly Dickard; Great-grand children, Tyler and Bailee Cope, all of Twin Falls, Idaho, and Sister, Ella Rose Partin of Buhl.
She is preceded in death by her parents; son, Dewayne; her brothers and one sister.
A graveside service will be 11:00 am, Thursday, September 18, 2014, at Buhl's West End Cemetery. A viewing will be 4:00 to 7:00 pm, Wednesday, September 17, 2014, at Farmer Funeral Chapel in Buhl.

In Lieu of flowers please make donations to Magic Valley Church of Christ or charity of your choice.

To order memorial trees or send flowers to the family in memory of Alvalee Cope, please visit our flower store.