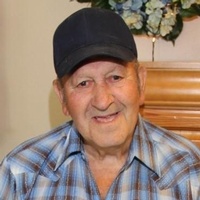 Angel Laucirica, 82, of Buhl, passed away at Ashely Manor in Twin Falls, Idaho on December 18, 2018.
Angel was born on July 26, 1936 in Ibarrangelua, Vizcaya, Spain to Fernando and Polonia Laucirica. He was the second oldest of seven children and the only boy. Angel came to the United States in 1964 as a sheepherder, as did many Basques during that time. In 1968, Angel began working for Rangen, Inc in Buhl and in June of 1970, he married Judy Thomas (Smith) and gained a family with the addition of her daughters, Vickie, Sindi and Debbie. In 1972, Angel and Judy welcomed another daughter, Kristi, into their family. In 1976, Angel became a United States Citizen, he was very proud of this accomplishment.
Angel always wanted to own a farm and in 1975, he moved his family to Richfield, Idaho where he and Judy owned a dairy farm until 1987, when they sold the farm and Angel began working at Avonmore Cheese, now Glanbia. He retired from the cheese factory in 1997 and purchased West Point Service in Wendell, Idaho. He and Judy loved their time there as well as all of the new friends they made. When Judy’s health declined and she passed in 2006, Angel sold the business and moved to Buhl where he worked part time at Rangen, Inc. He worked there until he retired in 2015.
Angel worked very hard during his life but would occasionally take time to go fishing, which he enjoyed very much. He also loved hosting barbeques in the summer and spending time with family and friends.
Angel is survived by his six sisters, his daughters, Kristi (Sterling) Deitrick, Debbie (Jim) Hurst, Sindi (Larry) Covey and Vickie (Clint) Sager, as well as his grandchildren and great grandchildren.
He was preceded in death by his wife, Judy and his parents.
A memorial service will be held Friday, January 4, 2018, 2:00PM, at Immaculate Conception Catholic Church in Buhl.
Memories and condolences may be shared with the family on Angel’s memorial webpage at www.farmerfuneralchapel.com.

To order memorial trees or send flowers to the family in memory of Angel Laucirica, please visit our flower store.