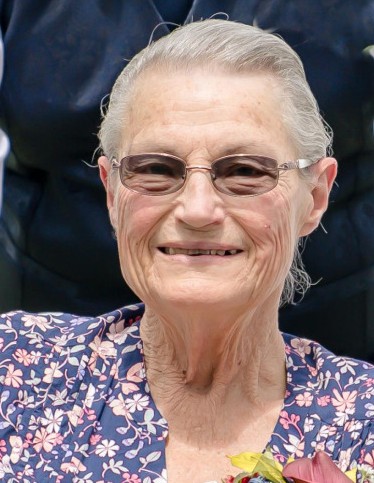 Ann Hulse Strickler peacefully passed away Wednesday, February 17, 2021, holding the hand of her loving husband of 63 years and two days in their family home.

Ann was born December 27, 1937 to Kenneth and Evelyn Hulse at their home in Trenton, Utah. Ann was the second youngest of eight children. The family moved to a farm in the Snake River Canyon north of Buhl, Idaho in 1946. Ann loved growing up on the farm. She used to love to go lay in the alfalfa field out of the wind and watch the clouds float overhead. She enjoyed riding her horse, Tony, who was blind in one eye. She would play “ditchem” or “tag” around the haystacks with the neighbor kids and had a great time doing so. Every summer in her early years was spent is the beet fields. As a family they thinned, topped, and loaded the beets by hand.

The summer leading up to her senior year of high school, she worked at the West Thumb in Yellowstone Park. Ann graduated from Buhl High School in 1956. The following fall she attended BYU but after one semester she decided that college was not for her due to her being home sick for her family. Shortly after returning home from college, she moved to California to live with her sister, Darla. Here she was set up on a blind date with a young gentleman, Duane Strickler. She soon realized he was the love of her life and they were married February 15, 1958 in Kingsman, Arizona. Three years later they welcomed their first child Donald. When Donald was a year old, they moved to Kahoka, Missouri to be near Duane’s side of the family. Once settled, they welcomed their second child Debbie, and a couple of years later, their third child Darin.

In the spring of 1966, Duane and Ann quit their jobs, packed the kids and all their possessions, and moved to Buhl, Idaho to be near Ann’s side of the family. Here they settled in and welcomed their fourth child Deanna. Duane and Ann were sealed in the Idaho Falls Temple and had their children sealed to them for eternity on April 19, 1975. A year later, they welcomed their fifth and final child Daniel.

Ann worked as a teller for US Bank for many years and was able to retire from the bank in 1999. After she retired, she began a new adventure, babysitting her grandchildren. Along with preschool, she taught them life lessons through crafting, baking/cooking, chores, and the true meaning of family. The time spent with her grandchildren was mutually cherished and the memories endless.

Ann lived her life for her family and implemented family dinners on Sundays, a tradition passed on from her mother. Her favorite activities were watching her children and grandchildren in their various events and sporting activities, no matter how far the travel was. She loved celebrating the holidays surrounded by her loved ones and making sure they felt her love through her cooking. Ann was an active member of the Church of Jesus Christ of Latter-day Saints and served many church callings over the years. She was a woman of strong faith and love for her Heavenly Father. She prayed endlessly for her family and was always willing to lend a helping hand or a shoulder to cry on. In addition to cooking, she enjoyed painting, quilting, and crafting.

Ann’s family would like to thank the many hospice and medical workers that provided care and support over the past few months.

Memories and condolences may be shared with the family on Ann’s memorial webpage at www.farmerfuneralchapel.com.

To order memorial trees or send flowers to the family in memory of Ann Strickler, please visit our flower store.