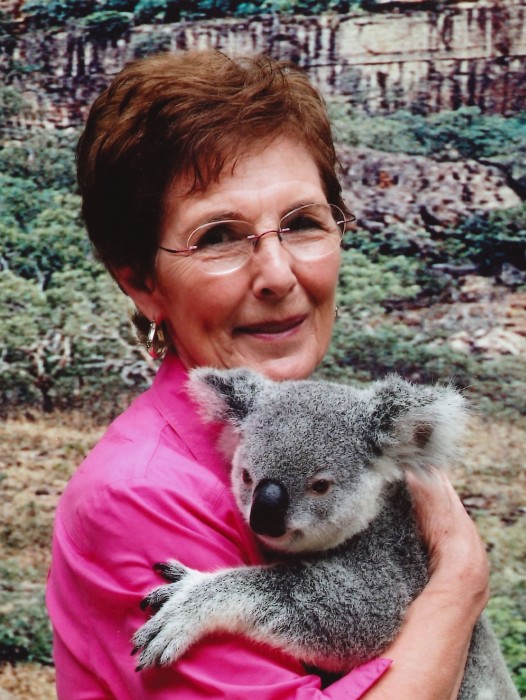 A true lady and beautiful soul left our presence on this Earth to join her Savior, Jesus Christ in Heavenly Father's Kingdom on December 6, 2019. Clydea Antoinette Ayers of Buhl, Idaho, passed away peacefully in her home with her family after a long struggle with dementia and a very aggressive pancreatic cancer.

Antoinette was born on June 25, 1941 at Sacred Heart Hospital in Coburg, (Melbourne), Victoria Australia to Clydea and Albert Robbins. She attended Coburg West Elementary School and finished her education at the Flemington Girls School. Her first job was switchboard operator at Glenbervie Timber Company. She went on to work for Avis Rent a Car, transporting cars from the mainland to Tasmania. In her early twenties she enjoyed working at The Chateau Ski Resort in New Zealand as well as backpacking across the South Island.

In September 1967, she moved to the United States with Charles Bishop Beymer where they were married. They had one child, Jennifer. They were divorced shortly after.

Antoinette met the love of her life, Stanley George Ayers on a blind date on May 10, 1971 and they were married on June 17, 1972. A short time later Stan adopted Jennifer as his own. The family of three spent 14 years residing at Thousand Springs Trout Farm.

Antoinette cherished her girlfriends more than words could say. In 1974, they started up a Christmas boutique in "Granny" Beulah Chisholm’s barn called "Granny's Barn". From then on, they were known as "The Granny Girls". They were always happy to help and serve in their community.

"Fred", as her friends and Stan affectionately called her, enjoyed being a stay-at-home mother until 1976 when she opened a fabric store in downtown Buhl called The Calico Patch. Just a few years later, in 1980 she would buy a flower shop and combine the two becoming Antoinette's Flowers and Fabric.

During her time of business ownership, she was involved in the planting of trees downtown Buhl, the new northside grade on Clear Lake's road to the interstate as well as many other achievements during her tenure as Buhl's first female Chamber of Commerce president. Being a foreigner herself she threw herself into the A.F.S. foreign student exchange program welcoming and helping to raise money for kids coming to the states. Of all of Antoinette's accomplishments, she was most proud of her knitting group and her sister Elva's involvement in knitting skull caps for the United States military. She and her crew also knit numerous children's sweaters for the needy as well as prayer shawls for the shut-ins and the sick.

Fred was a very talented woman with many aspirations including sewing, knitting, oil painting, traveling, gardening, baking, cooking and entertaining. Everything she tried her hand at she did exceptionally well.

In 1990, she accepted the Lord, Jesus Christ as her personal savior. She was baptized on February 26, 1995 at the Buhl Christian Church. She would later attend Calvary Chapel Buhl.

She was preceded in death by her mother, Clydea; father, Albert; grandparents; brother-in-law, Larry; and sister-in-law, Sherry.

A memorial service will be held at 11:00 am, Saturday, December 14, 2019 at the Calvary Chapel Church 1004 Burley Ave., Buhl. There will be a luncheon reception immediately afterwards.

We the family would like to express our most heartfelt thanks to Hospice Visions for their care of our beloved.

Memories and condolences may be shared with the family on Antoinette's memorial webpage at www.farmerfuneralchapel.com

To order memorial trees or send flowers to the family in memory of Antoinette Ayers, please visit our flower store.