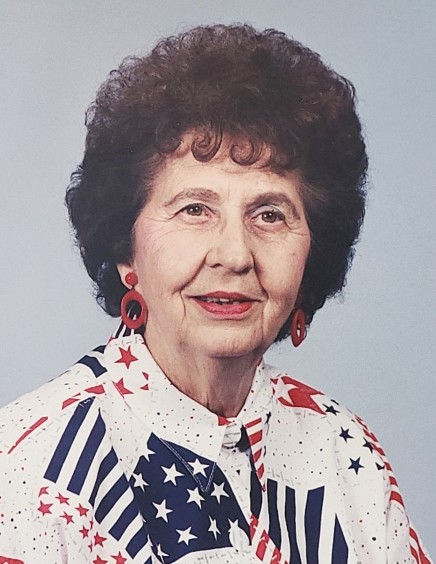 Arlene Delores Kyles, age 96, passed away peacefully on Saturday, December 18, 2021 at St. Luke’s hospital. She was born on March 4, 1925 to Edward and Olga Kubik Herzinger at their home in Buhl, Idaho.
She attended Syringa school, Buhl High School, and graduated from Idaho State University with a bachelor’s in education. The majority of her teaching career was spent at Buhl Elementary, later known as Popplewell Elementary. Arlene loved teaching and dedicated 40 years to teaching children at Poplar Hill, Deep Creek, Filer, Lincoln, and Buhl Elementary. In addition to teaching, Arlene was fully involved in Dilettantes and was later inducted into the Dilettante Hall of Fame. Her love of music was a staple in her life, influencing her involvement in Dilletantes as well as the 5th grade musicals at Popplewell.
Travel was another of her enjoyments, with trips to Australia and Germany being some of her most memorable experiences. When Arlene wasn’t busy retail shopping at the mall, she could be found in her garden, and she continued to tend her garden until she was 94. Arlene loved her cats. Her favorite housecat, Zemma, passed away at the West End Vet Clinic the same night as Arlene. They both entered Heaven together.
She was preceded in death by her parents; brother, Vernon (Betty) Herzinger; and her husband, Robert. She is survived by her brother, Loren (Norma-deceased) Herzinger; son , Garland (Paula) Kyles; daughter, Lark (Charles) Kruse; grandchildren, Amethyst (Benjamin) Griggs, Saffron (Graham) Brooks, and Gamaliel Kruse; and the stars in her eyes, her great-grandkids, Evangelina and Garren Griggs.
A graveside service will be held at 10:00 a.m., Thursday, December 30, 2021 at West End Cemetery, with the funeral service following at 11:00 a.m. at the Frist Christian Church, 1005 Poplar St., Buhl.
In lieu of flowers, the family respectfully requests that donations in Arlene’s name be made to either Clover Christian School or the Buhl QRU.
Memories and condolences may be shared with the family on Arlene’s memorial webpage at www.farmerfuneralchapel.com.

To order memorial trees or send flowers to the family in memory of Arlene Kyles, please visit our flower store.