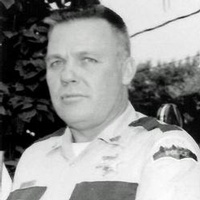 On January 1,2015 Benjamin Ernest Ekrut passed away peacefully at the age of 81 while residing at Highland Estates in Burley.
Ben(or Benny to many) was born to Bessie Leta Harrington and Erbel Ernest Ekrut on June 8, 1933 in Hagerman , Idaho. He was the second of five children. He attended school in Buhl and would have graduated in 1951 but he begged his mom to sign the enlistment papers so he could serve his country. He joined the Navy at the age of seventeen and served on the U.S.S Taussig from December 19,1950 to April 3,1954 in the Korean conflict. After his honorable discharge from the Navy, he returned to Buhl and finished High School in 1956.After school he held many jobs, one of which was a car skinner at the Kennecott copper mine in Ruth Nevada. This is where he met Lowell Kirk who introduced Ben to his younger sister, Genele. Benny and Genele were married on January 28, 1958 in Eureka , Nevada. Three children where added to this union; Don, Lynnette and Bob.
The family moved around for a while living in Blue River Oregon where Ben was a logging truck driver, then Walla Walla, Washington where he was a prison guard and at the time he attended college where he studied Sociology. They then returned to Ben's home town of Buhl, Idaho in 1966 where he found his true passion in police work, working up to being the Chief of Police for many years until 1982, when he felt it was time for him to move on. After that he worked for Rangen's as a long haul trucker and then various other trucking companies including Gary Paulson's. He never slowed down for even after his retirement, he became the Buhl Fire District Commissioner and held that position for twelve years until his health would no longer allow it.
He is survived by his sisters, Evelyn(Blaine)Rhodes and Lucinda Wright; his brother Everett(Joyce)Copenbarger; his son, Don Ekurt; his daughter,Lynnette(James) Martinez; his grandchildren, Clay(Shawna)Crown, Kristy(Bobby) Finch and Kerry Zemke and his great grandchildren, Samantha, Jackson, Essence, Boston, Ivy, Josh, and Kimber.
He was preceeded in death by his parents; his wife, Genele; his sister, Anna May and his son, Bob.
A funeral service has been scheduled for 2:00 p.m., Saturday, January 10, 2015 at the First Christian Church in Buhl, Idaho. A burial service will follow the service at the West End Cemetery in Buhl. Arrangements are under the direction of Farmer Funeral Chapel of Buhl, Idaho.
We, as a family, would like thank the staff at Hiland Estates along with Horizon Home Health for their kind care of dad in the last year and a half and especially in the last few months. We cannot express enough how grateful we are to you. Thank you Pam of Horizon and Melissa, Rod and the rest of the staff at Hiland for making dad's last days comfortable.

To order memorial trees or send flowers to the family in memory of Benjamin Ekrut, please visit our flower store.