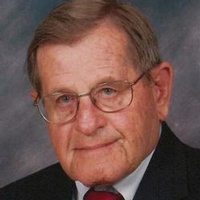 Bert Banholzer of Filer, Idaho passed away peacefully on Sunday, December 21, 2014.
Bert was born to Minnie and Leonard Banholzer August 15, 1925 in Milwaukee, Wisconsin. He attended schools in Milwaukee and kept in contact with 4 of his Junior High school friends up until his death.
In the middle of his senior year in high school, he was drafted into the United States Army and joined the feared "Fighting 36th ‘Texas' Infantry Division" graduating from bootcamp on June 6, 1944 and designated as a Combat Medic. He fought with the 36th Division through the muddy forests and snowy mountains of Southern France eventually crossing the Rhine River into Germany and Austria where they captured many high-ranking Nazis at the end of the war. His many awards and medals included the Bronze Star which he received for treating several wounded GI's and carrying them to safety while under heavy enemy small arms and artillery fire. Shortly after the war, he transitioned to the Army Reserves finally retiring at the rank of Sergeant Major. For his full-time job, he was as a technician for the Bureau of Identification for the Milwaukee Police Department. He was also active in the Wisconsin Industrial Photographers' Association.
He ended his bachelorhood of 48 years, on April 14, 1974, when he married Eileen Lierman, from Filer, Idaho. Eileen was teaching in the Lutheran School System in the Milwaukee area at that time.
In August of 1993, they moved to the Clover area where Eileen had grown up. Bert said he could retire there because of the beautiful Clear Lakes Golf Course which was where he would golf while visiting his wife's family in the Buhl/Filer area. Once retired, they became world travelers, visiting Germany, Russia, Scandinavia, travels to Hawaii, Alaska and regular trips back to Wisconsin. In the past he had served as the Clover Precinct Committeeman for the Twin Falls County Republican Central Committee. He was an active member of the Buhl Rotary Club. He lived to care for his community and country.
Bert was preceded in death by his parents, and a sister, Delmar. He is survived by his wife, Eileen, and several of her loving nieces, nephews, and their children who treated them as their second grandparents.
A funeral service will be held 11:00 a.m., Saturday, December 27, 2014 at Clover Trinity Lutheran Church - 3552 North 1825 East, Buhl, Idaho. A viewing will be held from 5:00 to 7:00 p.m. on Friday, December 26, 2014 at Farmer's Funeral Chapel in Buhl.
Memorials may be given to Clover Trinity Lutheran Church or School or the American Legion.

To order memorial trees or send flowers to the family in memory of Bert Banholzer, please visit our flower store.