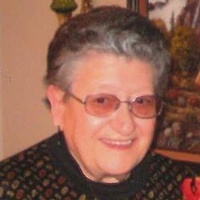 Betty was born October 1, 1927 to Mary and Mike Kambrich in Buhl, Idaho. Betty attended Buhl schools and graduated from Buhl High School. She married Gene Hopkins and together they had four children. Betty and Gene were married for 32 years. Gene passed away in 1994.

Betty was a housewife when her children were young. She worked for many years as a rural route postal carrier South of Buhl, eventually retiring from the Postal Service.

Betty was a life long resident of Buhl and was very proud of this fact. She loved the Twin Falls County Fair and looked forward to participating and attending every year. She enjoyed sewing, canning, her flower garden and spending time with her family. Betty was a founding member of the Buhl Beta Sigma Phi sorority and continued with the group throughout her life.

Betty is survived by her children, Pamela Flagella of Washington, Flora (Chuck) Silvers of Idaho, Grant (Lori) Hopkins of Texas and Janet (Bill) Hogelin of Massachusetts; three grandchildren and one great-grandchild on the way.

A funeral service will be 2 p.m. Wednesday, December 30, 2015 at Farmer Funeral Chapel in Buhl. A viewing will be 1 - 2 p.m. prior to the funeral at the chapel. Interment will follow services at the Buhl West End Cemetery.

To order memorial trees or send flowers to the family in memory of Betty Hopkins, please visit our flower store.