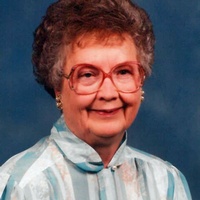 Beulah Moore Atkins Spradling passed away April 3, 2018 at Bridgeview Estates in Twin Falls, Idaho. Beulah was born July 31, 1927 in Buhl, Idaho to Audrey Wheeler Moore and Lonnie Moore. She attended Cedar Draw elementary school and graduated in 1946 from Buhl High School as salutatorian of her class. She graduated from S.I.C.E. Albion Teacher College in 1948. Beulah received many leadership honors from her classmates in high school and college.

Beulah worked at M. H. King Co., Albion Drug Store, and was a substitute preschool supervisor in the S.I.C.E. training school. She taught for many years in the Castleford and Buhl School districts. She began the first in-school kindergarten program in the Buhl School system.

Beulah and Harold Atkins were married in Boise, Idaho on February 16, 1957. They lived on the Atkins farm south of Buhl where they farmed and raised cattle. They also raised twin sons, and enjoyed many wonderful years together until Harold passed away May 10, 1983. Loy Spradling and Beulah were married May 29, 1988 in Featherville, Idaho and the Spradlings lovingly welcomed Beulah into their family. Loy and Beulah enjoyed many family gatherings, trips and adventures together until Loy’s passing on October 31, 1997.

Special thanks to Doris and Gary Meyers, the wonderful caring staff of Bridgeview Estates, Ginger, Carol, John, and all of the Hospice Visions staff, Dr. Brian Fortuin, , and members of the Valley View and Deep Creek Mennonite Churches.
Beulah’s life has been filled with examples of sincerity, compassion, generosity, humor, and kindness to others. God, family, friends, and children were so very special to her. We will truly miss her.

In lieu of flowers, the family suggests memorials be given to the Cystic Fibrosis Foundation, Hospice Visions of Twin Falls, or a charity of your choice.

To order memorial trees or send flowers to the family in memory of Beulah Spradling, please visit our flower store.