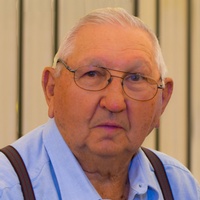 Blaine was born in Nounan, Bear Lake, Idaho on November 13, 1931. At the age of five, the family moved to Hibbard, a community northwest of Rexburg, where he attended elementary school. In 1950 he graduated from Madison High School in Rexburg. He was active in FFA, speech, choir and drama. He served an honorable mission in Western Canada from 1953 to 1955. Following his mission, he was drafted into the U.S. Army in 1956. He completed his army schooling at Fort Eustice, Virginia and completed his two years of active duty in the Harbor Craft Station at Hanford, Washington. This was followed by two years active reserve and two years standby, upon which he received an honorable discharge in 1962.

Blaine has always been an active member of the Church of Jesus Christ of Latter-day Saints and served in many callings.

Blaine worked for the U.S. Government for 31 years, retiring in November 1990. In 1991 he began 18 years of working with AIS Irrigation and Supply. Since September 2009 he has worked for Sliman & Butler Irrigation. All his working years he had many part-time jobs to support his family.

He sang with the Magichords Barbershop Chorus in Twin Falls for 19 years. While in the chorus, he served for two years as president and was named Barbershopper of the Year for 1994.

He is survived by his two sisters, JoAnn Christensen; and Jean Pollitt of Utah; his wife of 62 years; eight children; 34 grandchildren; and 18 great-grandchildren.

A funeral service will be held at 11:00 am, Saturday, March 16, 2019, at the Church of Jesus Christ of Latter-day Saints, 1001 Fair Street, Buhl, Idaho, with Bishop Ryan Bowman conducting. Family will greet friends and family from 9:30 am till 10:30 am. Graveside dedication will follow at West End Cemetery.

Condolences and memories may be shared with the family on Blaine's memorial webpage www.farmerfuneralchapel.com.