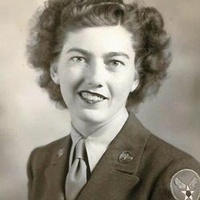 Bonalyn "Bonnie" Gates, passed away August 11, 2017 of old age, at her home for the past seven years, Brookdale Sr. Living in Twin Falls, Idaho.

The Runyan family moved to Castleford, Idaho when mom was a child. She attended Castleford schools and graduated from Castleford High School in 1941. Mom joined the Women's Army Corps (WAC) in 1944. The WAC took her to McClelland Sacramento CA where she made many life-long friends.

After her discharge from the Army in 1945 she moved back to Twin Falls and attended Twin Falls Business College. She lived and worked in Salt Lake City and Portland before moving back to Twin Falls to work for Freidman Bag Company in Twin Falls. Her position at Freidman's eventually led to a big move to Los Angeles California. During this time she met James Oran Gates. They were married on September 3, 1954.
Several years later her first daughter Bonnie LeAnn Gates was born followed by little sister Andrea Jean Gates two years later. From that day forward we have been known as "Bonnie's Girls." That same year our family moved back to Twin Falls. Shortly after the move back to Twin Falls, Mom began working at Haney Seed Company. She retired from Haney's in 1986.

Mom and Dad were divorced when we little girls. Mom raised the two of us as a single-parent. Mom taught us the value of strong work ethics and education. She provided us with everything we ever wanted while teaching us the importance of saving money for the future.
Mom was an advocate for victims and women's rights. Throughout her life she was involved in many local and national organizations that supported and promoted women's' rights.

Mom was a member of the United Methodist Church of Twin Falls and was active member of United Methodist Women's group for many years.
Mom is preceded in death by her mother and father; her three siblings, Emma Darline Dutton, Wade Lewis Runyan and Violet Valentine Ruckman; ex-husband, our Dad, James Oran Gates; a niece and two nephews, David Runyan, Audrey Dutton Davis and Stanley Ruckman.

Linda, Sharon and Patricia thank you for your frequent visits to Mom while she lived at Brookdale. We appreciate the companionship you gave to Mom as well the Dairy Queen blizzards, the hair-cuts, the manicures and pedicures, the bouquets of flowers and all the other goodies and things each of you provided for her.

We would like to thank Brookdale Sr. Living and the team from Visions Hospice for keeping mom safe and comfortable during her final years. We would also like to thank Dr. Brian Fortuin - your sense of humor and your forthright approach to Mom's health issues during the past few years were greatly appreciated.

In lieu of flowers donations may be made to the Twin Falls Humane Society or a charity of your choice.

To order memorial trees or send flowers to the family in memory of Bonalyn Gates, please visit our flower store.