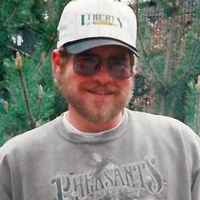 Brian Kent Tadlock, 49, of Buhl, was born March 6, 1966 in Twin Falls, ID to Butch and Julia Tadlock. He was the first of three children with sisters, Lori and Tiffanie.
He attended school in Castleford and Buhl; graduating from Buhl High School in 1984.
He started working as a teenager with his father and uncle, Ken Ellis at Valley Trout. This led to many years as an expert in the aquaculture industry. He spent his last few years as a co-owner with his father in Tadlock Trucking. During this time he had the privilege of working side by side with his son, Braden.
He met Dina Rodig and they were married in June of 1987. They had 28 precious years together. From this union came two sons, Aaron Tyler and Braden Allen. He also had a daughter, Savannah Cooper from a previous relationship.
Brian was an avid sportsman. These activities included hunting, fishing, camping and riding ATV's. He truly enjoyed all those activities surrounded by friends and family. Drawing, painting and tinkering with all things mechanical were among a few of his other favorite past times. And we can't forget his love of manly outdoor cooking.
Brian was preceded in death by his son, Aaron.
He is survived by his loving wife, Dina; son, Braden (Emily); daughter, Savannah (grandchildren, Anthony and Audrey); his parents, Butch and Julia; sisters, Lori (children, Christopher, Amanda, and Kendall) and Tiffanie (husband Jim, children, Leaf and Kyle).
Graveside services will be held Friday, March 11 at 11:00 a.m. at the West End Cemetery in Buhl. A viewing will be 5 - 7 p.m. Thursday, March 10 at Farmer Funeral Chapel in Buhl.
In lieu of flowers, donations can be made to the Brian Tadlock Memorial Fund, found on gofundme.com.

To order memorial trees or send flowers to the family in memory of Brian Tadlock, please visit our flower store.