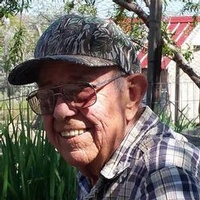 Calvin "Cal" Dyer passed away peacefully into the loving arms of his lord in his home surrounded by family on March 3rd, 2017. Born August 28th 1928 he was the youngest of 4 children born to Willis & Della Dyer in Clinton County Arkansas. He married Ruth Sumner in April 1946 and moved to California where he was a contractor for over 40 years. Some of his accomplishments were the Modesto Mall and Oroville Dam, however, his greatest accomplishment of his contracting career was being the project manager of 3 hospitals in California.
He retired in Thorton, CA where he built a beautiful home for his family and a vineyard. In 2000 Cal and Ruth moved to Buhl, ID to be hear family where they became a staple of the community. Cal spent his time being a valued part of the West End Senior Center serving on the board and as a chairman. He remodeled the kitchen and was able to acquire a bus for the center to help transport those unable to drive. Cal was always searching for ways to help friends, family and those in need.
Cal was an avid builder, woodworker and fisherman. He enjoyed traveling and exploring many states with his family. His hobbies included collecting and grading coins and was also member of the Masonic Temple.
He is proceeded in death by his parents Willis & Della, his siblings, his son Richard and his granddaughter Amber Rose. He is survived by his wife of 70 years Ruth, his daughters Sheila (Gary) Dannenhauer of Buhl, ID and Sharon (Patty) Beasly of Gulfport, MS. His grandchildren Tamie, Ron, Teresa, Timothy, Jolene and Kristen and 8 great-grandchildren.
Services will be held at 2:00p.m. Wednesday, March 8th at the Buhl Methodist Church. Following the service a celebration of life will be held at the West End Senior Center. Donations can be made to the West End Senior Center in Buhl ID. Arrangements are under the direction of Farmer Funeral Chapel in Buhl.

To order memorial trees or send flowers to the family in memory of Calvin Dyer, please visit our flower store.