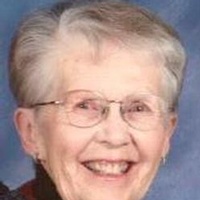 Eileen Peterson was born on Nov. 2, 1931 in Twin Falls to Thelma and Fred Perry. She passed away at Visions of Home Hospice House near Jerome on July 27, 2016 after a long battle with Parkinson's Disease.

While Eileen was still in grade school, the family moved first to a farm south of Eden, and then to the Greenwood community east of Hazelton. She graduated from Hazelton High School as valedictorian of her class, attended Southern Idaho College of Education in Albion, and graduated from Southern Idaho University in Pocatello.

She taught for two years in Gooding before her marriage and for seven years in Castleford when her children were young.

Eileen married John (Pat) Peterson in 1953 and moved to Castleford where she has lived since. She was instrumental in operating the trucking, livestock, and farming businesses with Pat.

She was an active member of the Castleford United Methodist Church. She loved to read, and was also an enthusiastic bridge player.

One brother, Charles Perry and one sister, Sharon Kerner, also survive her. She was preceded in death by her parents, her husband, one sister, Evelyn, and one grandchild, Burt.

A memorial service will be held at 11:00 Wednesday, August 3, at the Castleford United Methodist Church.

In lieu of flowers, the family suggests donations may be made to Hospice Visions at 1770 Parkview Drive, Twin Falls; the Castleford United Methodist Church or a charity of your choice.

To order memorial trees or send flowers to the family in memory of Catherine Peterson, please visit our flower store.