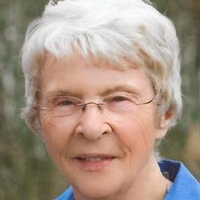 Cornelia Aardema went to be with her Lord and Savior on January 4, 2016.

Cornelia was born on December 1, 1920 to David and Adrianna Sankey in Chandler, Minnesota, the second of nine children. Her parents didn't have any boys for several years so, Cornelia worked in the fields along side her dad, planting and harvesting the crops. At seventeen, her parents let her go to California. She stayed there and went to work as a nanny and housekeeper. One Wednesday night, at the church youth group skating rink party, she met a handsome guy named "Doc!" He soon became the love of her life and that love lasted 74 and a half years.

Cornelia and Doc married on June 26, 1941 and the next year a son, Donald was born. The war started and Doc was called to duty for the next two years. After the war, they were blessed with two more daughters, Mary and Caryn.

Our mother and grandmother was a selfless devoted Christian woman who loved the Lord and her family deeply. She has cured many from various illnesses with her homemade chicken noodle soup and fresh brownies. She loved to quilt, crochet and garden. We have all received handmade special gifts from her over the years. She always gave us her best and we will all miss her so very much.

Doc has credited all of his success to Cornelia and together they made an unstoppable team, setting an example to us all about how to love and how to have fun in our lives.

So faith, hope, love abide, these three; but the greatest of these is love. 1 Corinthians 13:13

She was preceded in death by her three sisters, Lavina, Dorothy and Johanna; her two brothers, William and David; her son-in-law, Richard Kelley and great grandson, William Boone Ciocca.

Cornelia was a faithful member of the Twin Falls Reformed Church in Twin Falls.

Arrangements will be under the direction of Farmer Funeral Chapel of Buhl, Idaho.

To order memorial trees or send flowers to the family in memory of Cornelia Aardema, please visit our flower store.