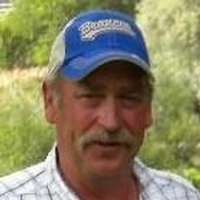 Buhl – Rick Cantrell, 58, of Buhl passed away on February 20th. Rick was born on May 10, 1960 in Twin Falls, ID to Derek and Georgia (Downey) Cantrell. He was raised on the farm north of Buhl where he started driving tractor at the age of seven and never stopped. He enjoyed a lot of good times with great friends farming on both sides of the canyon. Rick enjoyed playing sports while attending Buhl High School and excelled at football. His football team never lost a game. He graduated with the class of 1978.

Rick married Cynthia Ruffing the same year. They had two kids and were later divorced. He always said, “They were the best things I ever did.”

Rick stayed on the family farm and worked with his parents until their retirement. Jana (Gould) and Rick also purchased a farm nearby where they raised their kids. Rick and Jana enjoyed snowmobiling and traveling with friends. They separated in 2007.

Later in life, Rick took on a new adventure, and with his significant other, Chrissy Burrell, purchased Trouts Saloon. Rick always enjoyed a good Friday night and made a lot of memories with friends and family.

A graveside service will be held at 3:30 pm, Friday, March 1, 2019 at the West End Cemetery. The family would like to invite everyone to a party, how Rick would have wanted it, at the Gala Event Center, 907 Main St. in Buhl after the service.

In lieu of flowers, buy your neighbor a drink.

West End Cemetery
To order memorial trees or send flowers to the family in memory of Derek Cantrell, please visit our flower store.