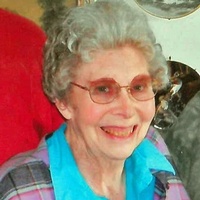 Doreen Elaine Peterson, 84, a life long Buhl resident, passed away on December 5, 2017.
Doreen was born on July 20, 1933. She was the last of five daughters born to Nellie E. Massey-Low and Vantoy Low. She attended Buhl Schools and graduated from Buhl High School with the Class of 1951. After graduation she was employed by Idaho Power where she worked in the Buhl office.

Doreen married Ralph H. Peterson on September 2, 1956. Doreen & Ralph raised three children on their farm and feedlot southwest of Buhl. Doreen continued to live at the farm even after she and Ralph divorced in the 1980's.

Although a shut-in for the past several years, Doreen was once an active member of Buhl First Christian Church. She taught Sunday School for over 10 years and was a member of the choir. Blessed with a beautiful soprano voice, Doreen frequently sang solos for church and funeral services. She also shared her voice talent through the church's Nursing Home Ministry. Doreen listened to a wide range of music although her personal record collection was heavily weighted toward classical music. She enjoyed attending Magic Valley Symphony concerts, Dilettante productions and Summer Band Concerts in the park.

Doreen liked to garden and was a member of the Fairview Grange and the Petal Pals flower club of Castleford. She was a talented seamstress and made dresses and dance costumes for her daughters as they were growing up. Her other interests included playing the piano, ballroom dancing, snow skiing, watching and attending movies and reading. Doreen was a kind-hearted soul who loved animals. Over the years the family had pets far too numerous to mention. Doreen had raised everything from a mallard duck named Reggie to a family of six orphaned rock chucks.

Doreen was preceded in death by her parents and all four of her sisters: Evelyn A. Tucker, Vernona M. Crosser, Geralda J. Zahm and Lucille Low who died as a baby; as well as various aunts, uncles, nieces, nephews and cousins.

In lieu of flowers, her children recommend a donation be made to the local Animal Shelter in Doreen's name.
A funeral service will be held 11:00 a.m., Saturday, December 16, 2017 at Farmer Funeral Chapel in Buhl. She will be interred near family at the Buhl West End Cemetery.

To order memorial trees or send flowers to the family in memory of Doreen Peterson, please visit our flower store.