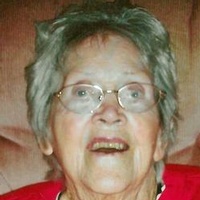 Doris was born January 11, 1914 in Parsons, Kansas to Jacob and Nora Maddy. In 1920, her family moved to Missouri where she grew up and attended school. In 1935, she married Harvey Haslip and together they had three children, Keith, Ted and Sandra.

In 1947, they moved to Idaho. Harvey farmed south of Buhl and Doris worked at the home raising the children. She was known for always working and staying active, which may have contributed to her long life. She loved to tend to her gardens and flowers. For fun she loved to camp in the mountains and fish.

In the 1970's, she and Harvey purchased land in Melon Valley and lived there together until Harvey passed in 1992. She was able to stay at the home with her son Ted until she moved to the Woodland Assisted living in 2005.

Doris was preceded in death by her parents, husband and seven brothers and sisters.

A graveside funeral service will be 2 p.m. Wednesday March 30, 2016 at the West End Cemetery in Buhl. Arrangements are under the direction of Farmer Funeral Chapel in Buhl.

To order memorial trees or send flowers to the family in memory of Doris Haslip, please visit our flower store.