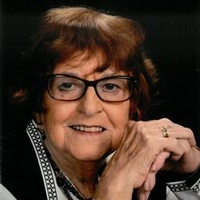 Dorothy Marie Thorsen
Heaven welcomed a new angel on Friday, June 9, when our Mom and Nanny, Dorothy Thorsen, passed away at Cedar Draw Assisted Living. We will miss her every day, but can be sure she will be watching over us until we meet again.
Dorothy was born in Montgomery, Minnesota to Frank and Mary (Staska) Soukup on April 26, 1930. She was the baby of the family and only daughter, sister to Frank and Richard Soukup. Dorothy attended Holy Redeemer Catholic Grade School and Montgomery High School, graduating in 1949. She was still in touch with several classmates in Minnesota at the time of her passing. Dorothy was a high school cheerleader and continued to be her grandkids' most dedicated fan and cheerleader throughout her life.
On April 29, 1950 Dorothy married Warren "Shorty" Thorsen. Daughters, Roxie, Shelly and Cori, were born to this marriage over the next decade. Dorothy and Shorty were married 42 years until his passing in 1992. Together they enjoyed golfing, fishing and bowling, but Dorothy's greatest enjoyment came from sitting in the bleachers or along 3rd base line watching her grandchildren participate in sports.
In her younger days Dorothy worked in retail at the South Town Mall in Minneapolis. In 1968 the family transferred to Buhl, Idaho with Green Giant Company and Dorothy worked as timekeeper during corn pack and pea pack for 38 years. Her employment with Green Giant/Pillsbury/Seneca brought her much enjoyment and friends she made there were a very important part of her life. She kept in touch with former co-workers, friends and family all over the country on Facebook.
Dorothy was a member of Immaculate Conception Catholic Church in Buhl and attended regularly until her health would no longer allow. She had a strong belief in St. Jude, the Patron Saint of Hope. She provided family and friends with St. Jude medals and frequently checked to make sure they had their medals and didn't need another one.
Dorothy is survived by her three daughters, Roxanne Benge, Macon, GA, Shelly Eguilior, Buhl, ID and Cori (Ben) Allen, Twin Falls, ID; grandchildren, Taylor (Misty) Dennis, Cypress, TX, Amber (William) Davies, Byron, GA, Adam (Alicia) Reynolds, Twin Falls, ID, Aric (Erica) Reynolds, Sergeant Bluff, IA, Breanna (George) Bassett, Macon, GA, Cassidy (Matt) Flynn, Lizella, GA, Abbe (Nik) Gumeson, Twin Falls, ID, and Landon Eguilior, Boise, ID; and great-grandchildren, Ashley, Ryan, Brayden, Brecklyn, Avri, Maddox, Andryk, Kasen, Bentley, Camden, Kennedy, Colten, George, Sellers, Harrison, Madison, Blaikley arriving in August, and Baby Reynolds to Aric and Erica arriving in December. Dorothy's parents, brothers and husband preceded her in death.
The family would like to thank Cedar Draw Assisted Living staff and Hospice Visions for their kind and loving care of our mother over the last few months.
A Catholic funeral service will be held at 11:00 a.m. on Friday June 16, 2017 at Farmer Funeral Chapel, 130 9th Avenue North in Buhl, with burial following at West End Cemetery.
Donations may be made in Dorothy's name to St. Jude Children's Research Hospital at www.stjude.org/give or 262 Danny Thomas Place, Memphis, TN 38105.

To order memorial trees or send flowers to the family in memory of Dorothy Thorsen, please visit our flower store.