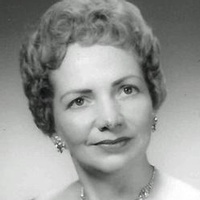 Eileen T. Duffy, 91, of Buhl, died Friday, September 5, 2014 at the Desert View Care Center in Buhl.
Eileen was born July 14, 1923, in Tecumseh, Nebraska, the daughter of Robert Ray Tracy and Willie Tate White. She spent much of her youth in Morehead, Iowa and Bastrop, Louisiana, where she graduated from High School in 1941. She moved with her parents and five siblings to Monrovia, California in that same year. Shortly after moving there, she became a licensed beautician, a vocation she enjoyed for many years.
Eileen married Harold A. Duffy on May 15, 1943. They made their home in Monrovia, where she gave birth to a daughter, Laura Ann, and son, Harold Alan.
Harold and Eileen, desiring a life in the country to raise their family, they moved to a cattle ranch in Mountain Home, Idaho in 1954. In spite of many hardships and sacrifices, Eileen enjoyed caring for the animals, gardening, canning, sewing and making friends in town, where she worked in Rose Oxarango's Beauty Shop. After Laura and Harold Alan graduated from the University of Idaho, Eileen and Harold moved to Buhl in 1968. They moved to Gerber and Callahan in Northern California in 1973, where they resided until 1991 when they returned to Buhl.
Harold passed away in September of 1999. After his death, Eileen greatly enjoyed quilting with dear friends at the Buhl Senior Center and at her home in Moonglo Village. She attended the United Methodist Church which nourished her sensitive spirit. Although her two children, four grand daughters and seven great-grand children are scattered around the country, she treasured the occasions when her family gathered in Buhl at her home for meals and treats she loved to prepare. She lovingly stitched quilts for every loved one (including dear friends). She delighted in learning how to play her electric organ, collecting recipes and poetry, reading the scriptures, gathering quilting fabric, writing her life story and sharing her love through letters. Everyone who had the good fortune to know Eileen were blessed by her gentle kindness.
Eileen is survived by her daughter, Laura Ann Gipson of Redding, California and her son, Harold Alan Duffy of Inyokern, California. She is also survived by four grand daughters, Susanne, Lara, Melinda and Heidi, and seven great-grand children. She is also survived by a sister, Lois Curry of Tehachapi, California, and many nieces and nephews.
She was preceded in death by three brothers, Robert, Keith, and Dick Tracy, as well as a sister, Helen Ferrell.
Visitation will be at Farmer Funeral Chapel in Buhl, Idaho, on Friday, September 12, 2014, from 5:00 to 7:00 pm. A funeral service will be held at 2:00 pm, Saturday, September 13, 2014 at the Buhl United Methodist Church. A private committal will be at the Buhl West End Cemetery, for family members only.
Eileen's family especially wish to extend their gratitude to all the staff of Desert View Care Center of Buhl, for their conscientious, compassionate and cheerful care of our mother, grandmother, great grandmother, sister and aunt.

To order memorial trees or send flowers to the family in memory of Eileen Duffy, please visit our flower store.