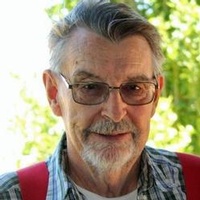 Elmer (Buzz) Schraft, age 75, from Hagerman, died peacefully at home on March 14, 2017 from a massive stroke.
Buzz was born to Elmer and Charlotte (Malumburg) Schraft on May 25, 1941 and was raised at the Yankee Fork Gold Dredge north of Stanley.
After his schooling and service in the Navy, he worked as an accountant for E. Legrand Nelson in Twin Falls. During this time he met and married Peggy (Cox) Kearsley in 1969. They had three children Robert of Boulder City, Nevada; Richard (Cindy) of Las Vegas, Nevada and Rachael of Phoenix, Arizona.
He established his own accounting practice in Wendell and served the wonderful people of that area for over 30 years. He loved hunting and fishing with his dad and boys. He loved the mountains and he loved living out in the country with lots of room around him. He loved animals and had some very special 4-legged sidekicks.
His family knew him as Dad, Grandpa Schraft, Uncle Buzz or Papa Buzz. Everyone else knew him as Mr. Schraft, the accountant; the guy who told every high school referee, at the top of his voice, that they were wrong; the guy that talked your ear off at Simerlys or the guy who walked to the Post Office every day.
He wasn't a member of any church but he loved "Papa Buzz Sunday" when his grandchildren would come and spend time with him.
He took great pleasure in his quick wit and his unique sense of humor, teasing everyone, but especially his mother-in-law and later, his daughter-in-law. His nieces, Ding, Dong and 'part-time' were also victims.
He was just as comfortable on the seat of his tractor as in his chair in the office. His equipment included machinery and calculators. He also loved dickering over automobile prices and bought many cars and pickups but never for sticker price.
He taught us all to give proper honor and respect for the past and to embrace the challenges of the future. He will be missed and remembered by many.
Buzz is survived by his wife, children, nine grandchildren, 13 great grandchildren, cousins, in-laws and many wonderful and beloved nieces and nephews.
There will be no services as per his explicit directions. Cremation and arrangements made by Farmer Funeral Chapel of Buhl.

To order memorial trees or send flowers to the family in memory of Elmer Schraft, please visit our flower store.