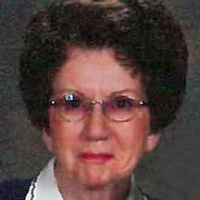 June was born on December 18, 1927 in Humboldt, Kansas to Naman Lathrom and Lenore Scantlen-Lathrom. June came to Buhl at the age of 15 and worked many jobs including Safeway Foods and Buhl Dry Cleaners. In 1947, she met her future husband, Robert Ring.

On June 27, 1948, June and Bob were married at the First Methodist Church in Buhl, Idaho. June and Bob lived on the Salmon River Ranch for 62 years and were blessed with three sons, Neil, Brent, and Todd. Together they raised cattle and June loved going out to the desert to look for new calves and check on the other cattle.

June was a member of the Buhl First Christian Church where she served as a deaconess, taught Sunday School, and helped with funeral dinners for several years.

June was preceded in death by her husband, Robert; son, Brent Ring and brother, Gale Lathrom.

A graveside funeral will be held at 11:00 a.m. on Saturday, September 5, 2015 at the West End Cemetery in Buhl, Idaho. Arrangements are under the direction of Farmer Funeral Chapel of Buhl, Idaho.

To order memorial trees or send flowers to the family in memory of Elva Ring, please visit our flower store.