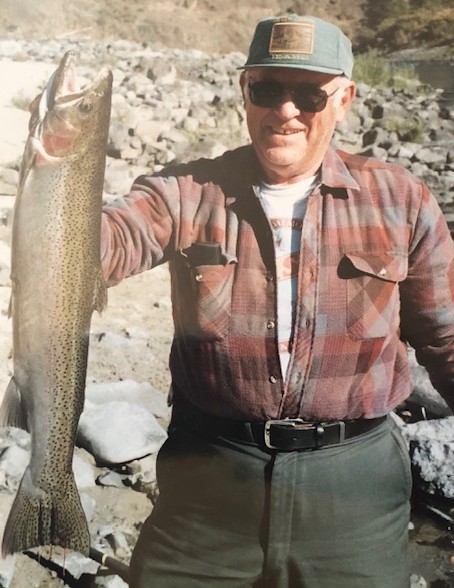 Eugene Thomas Pyles, 89, went home to the Lord, January 13, 2022 after a long struggle with Dementia. While we rejoice in his being set free, his loss is deeply felt by his beloved wife of 70 years, Norma Joan Pyles; their four children and spouses, David Pyles of Seattle, Washington; Terry and Cheri Pyles of Ketchikan, Alaska; Ted and Marilyn Pyles of Everett, Washington; and Christy Pyles and Mark Abraham of Riverton, Wyoming. In addition are his grandchildren, Brian Pyles of North Pole, Alaska; Matthew Pyles of Nashville, Tennessee; and Michelle Pyles of Boise, Idaho. He will be greeted in Heaven by his parents, Roy and Della Pyles; brothers, Lee and John; and sister, Louise.

Eugene served in the Air Force earning the rank of Sargent and Educational Specialist. After serving, he completed his studies at the University of Washington earning a Master of History and Education.  Over the years his passion for learning and knowledge would also lead to the equivalent of Master’s credits in Education Administration and Economics.

He began his official career in Seattle as a history teacher and counselor, earned his administration credentials and moved into administration as a Vice Principal. An advance that was just in time for the desegregation of the Seattle School District, during which he quickly earned a reputation that would follow him through his life, as being the calm in a storm, and a firm but fair man of integrity, respected by both students and staff. Over the years he decided to focus on rural education, first as a principal and then superintendent. Under his direct encouragement Adna, Washington became one of the first districts in Washington state to utilize computers in classrooms.

He set up innovative advanced therapies to help students with learning disabilities. All the while, maintaining that fair but firm and always encouraging way with students and staff that lead to him mentoring many teachers, administrators, and students to achieving so much more. After moving to the superintendent level, he expressed that he missed his daily interactions with students and continued to make sure they were always the focus of decisions.

After retirement in Washington, he accepted a position as the superintendent of the Buhl School District and immediately fell in love with Idaho, Buhl, and the people. He continued his innovative ways in education, becoming the voice that was depended on by his fellow superintendents for wisdom in complex decisions, and continuing to mentor teachers, students, and young administrators.

Still missing daily interactions with students, he developed a program for low-income students in which they earned learning points for shopping at his store. A store supplied with toys he made in his wood shop, and items purchased from his own pocket.

Throughout his life, Eugene was active in the community, as a church youth group leader with his wife, Cub Scout Leader, Scout Master, Lion’s member, Rotary member, founding member of the West End Men’s Association, and a number of other professional associations. As an Elder at the Buhl First Christian Church, members looked forward to his periodic turns at giving messages.

He loved humor and poetry, often combining the two into epic poems making friends and family laugh about the difficulties survived in the past year.  He was the neighbor that young husbands could depend on to have the right tool to loan and quiet instructions on how to fix and repair the broken, letting them be the heroes to their families. He and his wife developed and maintained a lengthy Mountain Bluebird Trail in the South Hills. School children across the Magic Valley enjoyed his presentations about bluebirds.  He was known to tell those that asked, he had been enchanted with the birds since boyhood as they did indeed symbolize happiness to him.

As a father there has been none more loving and dedicated to his family. Always there as a guiding hand in tough times, a patient instructor, and an endless source of faith and encouragement.  He expected our best efforts but picked us up when we failed and got us moving forward again.

In that career move to rural education, he and his wife purchased five acres, moved into their 18’ travel trailer and, with the help of his young brood, built a house and small farm. His favorite leisure pastimes were fishing and reading, mostly nonfiction always fulfilling that need to learn and know more.  He and Joan loved finding forgotten roads and exploring throughout the region and beyond. We picture him now, fishing pole in hand, book in his pocket, several beloved dogs around his feet, blue birds flitting overhead as he stands at the head of a forgotten trail to the perfect fishing hole.

There will be no formal service held at this time.

Memories and condolences may be shared with the family on Eugene’s memorial webpage at www.farmerfuneralchapel.com.

To order memorial trees or send flowers to the family in memory of Eugene Pyles, please visit our flower store.