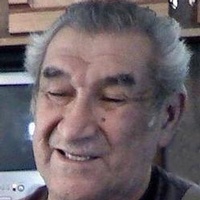 He was born in Santa Ana, CA on December 5, 1942 to Albert Eliseo Terronez and Dolores Lopez Terronez.

In 1961, he joined the United States Navy, leading to a lifelong career. He retired as an E-8 Senior Chief Boatswain's mate. He travelled to ports all over the world on several warships, including the USS Oldendorf and the USS Belleau Wood.

He was an avid Stephen King fan, reading and collecting every book and starting his son to follow in his footsteps. His real passion was woodworking. He made all kinds of furniture, including hope chests, high chairs, cradles and so much more. He was a lifetime member of both the American Legion and the VFW.

A great man, father and grandfather, he was big hearted, warm and funny. He was loved by all who met him.

He was preceded in death by his parents, Albert and Dolores Terronez, sister Elizabeth Lopes, granddaughters Kylie Terronez and Aleena Larsen, and son James Ashe.

To order memorial trees or send flowers to the family in memory of Eugene Terronez, please visit our flower store.