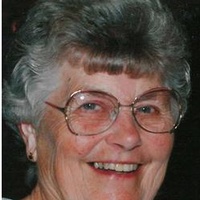 On November 9, 2014 Florence Lassen, with her daughters by her side, passed from this world into the loving arms of her Savior, Jesus Christ.
Florence was born on January 27, 1929 in Friedensau, Nebraska to Frederick and Helene Schmidt the 6th of eleven children. Florence grew up on the family farm in Friedensau that was settled by her grandfather in 1874. Florence's parents instilled in their children a foundation of faith that continues to this day. The family was very close as they grew up, worked, and played together. Their favorite pastimes were playing cards and baseball. Florence was baptized and later confirmed in her faith at Trinity Lutheran Church in Friedensau. Florence attended Trinity Lutheran School, Friedensau, through the eighth grade. Her brother Raymond, who moved to Clover, Idaho during the Depression era, asked Florence to come out to help them with their children when Georgia had to have surgery and she was pregnant with their youngest daughter. While there she met Raymond Lassen at a Walther League meeting. They continued to date and eventually became engaged. Ray and Florence were married at Trinity Lutheran Church in Friedensau on April 17, 1949 which was on an Easter Sunday that year. Raymond and Florence lived and farmed in the Clover, Idaho area throughout their married life.
Florence kept the faith which was instilled in her during childhood and youth and passed it on to her children. Florence was a homemaker while her children were young. When the children were older she became a custodian at the Clover Trinity Lutheran School and finally retired when she was 75 years old. Florence was a tireless worker as she raised her children, kept house, did farm chores, tended her garden, and baked meals. Mornings started with farm chores at 6 am and ended at 6 pm or later after chores were done and family fed. Florence was famous for her baking and nothing was better than her cinnamon rolls and lemon meringue pie. When she baked pies for farm sales in the area they were always the first to be sold. Florence had a large garden and summers were filled with planting, growing, and canning her produce. Later in life her children and grandchildren would be involved with the picking and canning. There was always food for everyone and everybody was welcome. When any of her family would visit it was always a time of celebration as it was important to her to keep in contact with her family. Her brothers and sisters and their families still continue a triennial family reunion to keep their family together.
Florence is survived by brothers, Marvin, Arnold, and Fred Schmidt; sisters, Velma Schleif and Frances Drews; four children, Joyce (Douglas) Larsen, Kathleen (Douglas) Morrison, Roger (Carla) Lassen, and Ronald (Becky) Lassen;13 grandchildren and 22 great grandchildren.
She was preceded in death by her parents; husband Raymond; infant son Steven Lassen; brothers Raymond, Walter, Orville, and Leonard Schmidt and sister Ella Baden.
Florence was a member of Clover Trinity Lutheran Church and was a faithful member to the end.
Funeral services will be held at11:00 am, Friday, November 14, 2014 at the Clover Trinity Lutheran Church with interment following at the Clover Cemetery. A viewing will be one hour prior to funeral service. In lieu of flowers, memorial gifts may be given to Clover Christian School which was such a large part of her life.
The family wished to give a special "Thank You" to Stoney Creek Living Center for their loving and wonderful care while she was a resident there and to Hospice Visions for their care during the final days of her life.

To order memorial trees or send flowers to the family in memory of Florence Lassen, please visit our flower store.