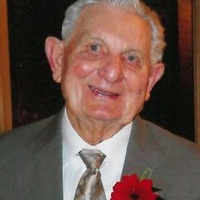 Frans "Doc" Aardema was born on October 20, 1920 in Doon, Iowa to John and Peternella Aardema. He was the son of a baker, and at a very early age learned how to work hard in the family bakery. He had some difficult times in childhood, often walking many miles in the deep snow to school, that was uphill both ways.

Doc moved with his family to California when he was about 13 years old. He said that it was a rough trip in a Model T with his parents, four kids and a dog. One of his first jobs was delivering milk from "Frank's Dairy". He would run beside the delivery truck gathering the empty bottles off the front step of customers, and replacing them with full bottles of milk. He got a job with a dairy, scraping corrals by hand beside his dad running a plow and horse. Later, he was promoted to milking 30 cows by hand twice a day, six days a week. Every week, he gave his paycheck to his parents.

His lucky day came when he met a girl at the church youth group skating party. When he saw Cornelia for the first time, he told his friend, "That's the girl for me." So began a love story that lasted 74 ½ years, until Cornelia's death this past January.

Doc and Cornelia were married on June 26, 1941. He was drafted into World War II and was soon shipped overseas to Germany. He became a member of the 2nd Armored division infantry called "Hell on Wheels", that walked along side the tanks. He survived the Battle of the Bulge, but suffered from frozen feet, almost losing them. The Army wasn't done with him, and as soon as he could walk, he was shipped to France to guard the border until the end of the war.

After the war, Doc decided to give sales a try and for the next 30 years, sold grain to dairymen all over Southern California. He also got his real esate license during the housing boom in California and successfully brought and sold many houses. He also dabbled in the dairy business on and off. When he was 60 years old, he started in the dairy business in Idaho. He enjoyed many years working with his kids and grandkids, partnering in three family dairies, and became a specialist in cow nutrition. He was inducted to the Southern Idaho Hall of Fame in 1994. Doc always credited all his success to his wife, stating he couldn't have done any of it without her.

He was very proud of his family. They all relied on him for his wisdom and humor. He was known for posting on the white boards at the dairy, his wise quotes he would find. For example, "You are rich by who you are, not what you have."

He was preceded in death by his dear wife, Cornelia; his brother, Charles; his sister, Emma Bouma; son-in-law, Richard Kelly and great grandson, William Boone Ciocca.

He was a life long member of the Twin Falls Reformed Church.

We will miss him so, but we are comforted to think that he is with mom in heaven and they are both so happy to be together again.

To order memorial trees or send flowers to the family in memory of Frans Aardema, please visit our flower store.