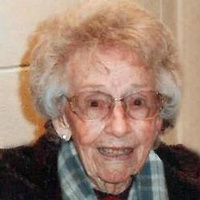 Frieda Pauline Johnston, 96, of Buhl, passed away peacefully of natural causes, Friday, July 28, 2017 at the home of her daughter JoAnne Craner, with JoAnne at her side.

Frieda was a caring and loving wife, mother, relative, friend and neighbor with a serving heart and a strong streak of independence. Her hobbies included, dancing, bowling, camping, fishing and hunting and she was an excellent shot. She considered gardening, canning and raising flowers part of being a wife and mother. She volunteered in 4-H, FHA, and youth shooting programs.

She and Cecil farmed in the Buhl and Deep Creek areas. After his death she spent many years working with seniors and owned a home health business, "Personal Connections."

Frieda was preceded in death by her parents, three sisters, five brothers, two children, two grandchildren and a son-in-law.

In lieu of flowers the family suggest donation be made to the West End Senior Citizens Center.

The family wishes to thank all of the Hospice Visions care givers that assisted in her care.

To order memorial trees or send flowers to the family in memory of Frieda Johnston, please visit our flower store.