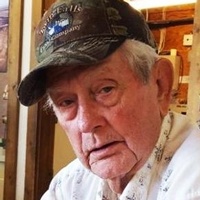 Gene Grubbs, 89, passed away on September 20, 2018 at his home in Filer, Id. Gene had suffered a heart attack a few days earlier.
Gene was born on July 19, 1929 at Ransom, Kansas to Roy & Ruth Grubbs of Alabam, Arkansas.
Gene worked for Twin Falls Flour Mill, Davies Tree Service and Comer’s Bulk Plant Service. Gene then became self- employed. Gene graduated High School in Huntsville, Arkansas in 1948 before joining the Navy.
Gene married JoAnn Ledbetter on June 22, 1950 in Huntsville, Arkansas. Gene and JoAnn had 4 children, Anna, Randy, Nancy and Danny. They were later divorced. He married Lucille (Pat) Kinsey in the mid 60’s and later divorced.
Gene loved salmon fishing and being outdoors trapping and rock hunting.
Gene is preceded in death by his parents, Ruth & Roy Grubbs; his brothers, Eugene and Robert; his granddaughter, Randi Lynn Banyai; daughter-in-law, Penny Jenkins Grubbs and son-in-laws, Larry Muse and Jan Banyai.
Gene is survived by his children, Anna Muse, Randy Grubbs, Danny Grubbs and Nancy (Jerry) Hamilton; step-son, JC (Debbie) Melvin;13 Grandchildren and 22 Great-Grandchildren.
A special thank you to all the wonderful staff at Encompass that helped Gene thru a difficult time. We the family cannot thank them enough. We also thank the many friends he had in Filer for their friendship. Gene will be missed by all.
A funeral Service will be held at 2:00 p.m., on Thursday, September 27, 2018 at Farmer Funeral Chapel in Buhl, Idaho. A time of viewing will be held between 5:00 and 7:00 p.m. on Wednesday, September 26, 2018, also at Farmer Chapel.

To order memorial trees or send flowers to the family in memory of Gene Grubbs, please visit our flower store.