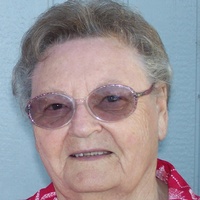 Gloria was a resident of Buhl, Idaho most of her life. She was born October 29, 1921 in Campbell, Nebraska. On August 28, 1942, she married Robert Eggleston, whom preceded her in death in 2015. They were an inspiring example of love, celebrating a total of 72 years of marriage.

She is survived by three of her children, Melvin Eggleston & wife Jan of Boise, Charlene Whiteley & husband Gary of Nampa and Keith Eggleston & wife Kelli of Buhl as well as all of her grandchildren.

Gloria enjoyed traveling to Nebraska to visit her childhood home where she would spend time with relatives and friends. She often told stories about sneaking off to dances where she and her friends had a lot of fun. She loved telling stories about the small town gas station that her father owned in Bladen, Nebraska.

After moving to Idaho, she met Robert and married. After Robert retired, they spent many winters in Arizona, enjoying the warmth and flea markets. She loved picking up new craft projects with her friends there and was usually making some kind of new project.

Funeral Services will be held at Farmer Funeral Chapel (130 9th Ave N, Buhl, ID 83316) on Tuesday, April 10, at 2:00pm. Graveside Services will follow at Buhl West End Cemetery, where she will be laid to rest with Robert.

In lieu of flowers, the family requests donations be given in her name to The Shriner’s Hospital, as her husband, Robert, was a dedicated Mason.

She’s with our heavenly father, reunited with her much loved brothers, parents, son and husband ... her mind and body restored. Although she will be greatly missed, she has been a blessing to many in her long life.

To order memorial trees or send flowers to the family in memory of Gloria Eggleston, please visit our flower store.