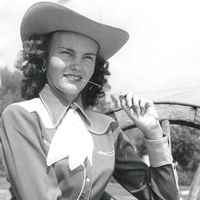 Jean Arlene (Winkler) Maxwell, 90, died peacefully in her sleep on March 5, 2017 in Clearfield, Utah after a brief illness.

She was born December 31, 1926 at home in Glendale, California to Harold T. Winkler and Blanche Whaley. She was the youngest of four children and grew up in Glendale and Burbank, California and graduated from Hoover High School in 1945. After graduation, she worked for Lockheed Aircraft in Burbank and the Los Angeles Police Department.

In 1948, while horse-backing riding in Griffith Park, California, she met Riley (Bud) Maxwell. They were married May 21, 1950 in The Little Brown Church in North Hollywood. Together they lived in North Hollywood (in a tiny apartment with a Murphy bed), Montrose, and La Crescenta, California. In October of 1953, they welcomed their only child, John. They were active in Square Dancing. When Bud retired in 1976, they moved to Buhl, Idaho where they built a home. Jean was active in the Northview Ladies Club, the Ladies Stock Club and formed many friendships due to her outgoing personality, positive attitude and kind heart. She loved the beach and going on long drives in the boonies with Bud. Jean was also a breast cancer survivor.

For the past 4 years, she was able to spend time with her son, grandchildren and great-grandchildren while living near them in assisted living in Clearfield, UT.

She is survived by her son John (Anne) of Kaysville, UT, 6 grandchildren, Wendy (Mike) Bowers of Kaysville, UT, Andy (Colleen) Maxwell of Eden, UT, Chelsea Hanson of Kaysville, UT, Riley Maxwell (Jennifer Hollon) of Buhl, ID, Muppy (Kristin) Maxwell (Billy Grace) of Kalaheo, HI, and Holly Maxwell (Bryan Lovelady) of Cheyenne, WY. She was also thrilled and blessed with 5 great-grandchildren, Harper (4), Leioni (3), Sawyer (2), Riona (1) and Connor (5 months). She is preceded in death by her husband Bud, both parents, two brothers, a sister, several nieces and nephews and a daughter-in-law.

Graveside services will be held on Saturday, March 11th, 11 a.m., at the West End Cemetery in Buhl, Idaho. A reception will follow. Arrangements are under the direction of Farmer Funeral Chapel in Buhl.

Her kind heart and soul will be greatly missed.

To order memorial trees or send flowers to the family in memory of Jean Maxwell, please visit our flower store.