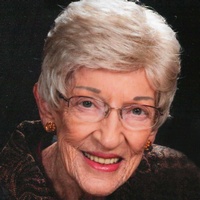 Jean was born on May 9th, 1932 to Jesse and Irene Reynolds in Rose Hill, Iowa. She and her younger sister, Ramona, grew up in Missouri, Iowa, and Colorado. One of her earliest memories was accompanying her Grandad Snyder as he delivered mail in the hills of Missouri. After graduating high school from Bent County High School in Las Animas, Colorado, she moved to Danville, Illinois and worked as a telephone operator.

One evening while dining at a supper club, she met Irving Tverdy. Soon after they were married, and the Air Force led them to Tucson, Arizona. Their son, Tim, was born while in Arizona. Four years later, they moved back to Irving’s home, Buhl, Idaho, to farm in the Castleford area and raise milk cows. Their daughter, Trena, then joined the family. Jean joined in working with the Tverdy family, especially with Aunt Rose and Uncle Albert, with putting up food for the year, and learning the traditions of Jaternice and Holuptsi. Jean also added some of her own traditions such as baking birthday cakes for all the nieces and nephews.

Jean worked outside of the home at different jobs through the years. She worked at Industrial Equipment, Green Giant Co., Kelly Oil, and the DMV in Buhl. When Irving was working the night shift at Green Giant Co., Jean had quite the job of trying to keep the grandkids and neighborhood quiet so as not to awaken him. Jean was very active in the Buhl Catholic Church and Buhl Council of Catholic Women. She held many offices with the Women’s League, and on the Deanery level. She was instrumental in the Catholic Food Booth at the fair for many years. She taught many girls from the parish how to set a table properly and proper meal serving etiquette. Jean was always willing to cook up a dish for potlucks, funeral dinners, or whatever was needed for the BCCW. She was also a member of Citizens on Patrol and volunteered with the Red Cross blood draws. She enjoyed the trips taken with the Good Sam Club and the adventures with their 5th wheel camper. Many memorable trips were made with the grandkids, and Willie and the gang to visit family in Missouri. Jean enjoyed reminiscing about these adventures, such as driving through Wyoming in blizzards, chocolate covered cherries, and tales of Bible Grove. Jean was never afraid to share her knowledge on housekeeping, especially with her grandchildren.
She was preceded in death by her parents, Jesse and Irene, her step mother, Leona Reynolds, and her sister, Ramona Johnston.

The family is grateful to Horizon Hospice, and her nurse Courtney for the care they provided at home. A special thank you to Dr. Dan Nofziger for his patience and care through the years.

To order memorial trees or send flowers to the family in memory of Jean Tverdy, please visit our flower store.