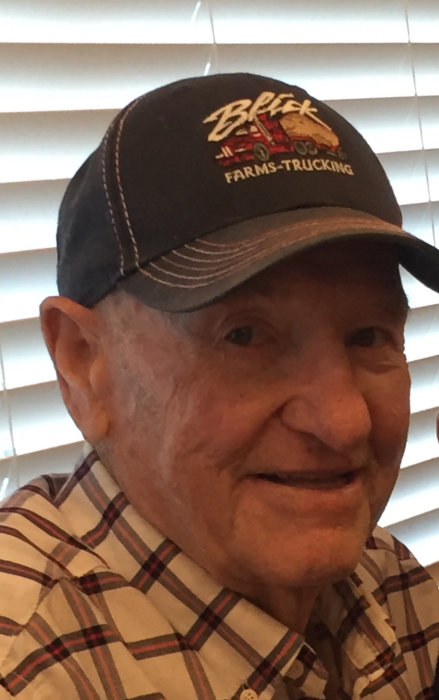 James “Jim” Wheeler was born on January 14, 1930, in Pikeville, Tennessee, to Floyd & Della (Burgess) Wheeler. In the spring of 1930, his parents, his 4 older siblings, his grandparents and other extended family traveled across the country on the train to begin their life in Castleford.

Jim attended Castleford Schools and played football and basketball. He claimed he had tried boxing and could have been “really good at it” except he didn’t enjoy punching his friends in the face. He graduated from Castleford High School in 1947. After graduation, he spent some time working for a resort in the Portland area. He loved his life in Portland but his Dad asked him to come home and help with farming, so he did.

On June 22, 1952, he married Virginia Casebeer at the First Baptist Church in Buhl. They had two daughters, Nancy and Janet. Over the years, he and Virginia served as unofficial foster parents to many young men who needed a home. His nieces and nephews would often visit for the summer or longer and help on the farm. He liked having a houseful of kids.

Jim was an avid fan of the Castleford Wolves. He was involved in the project to add lights to the football field and felt it was the best thing the community ever did for the school. He ran the scoreboard for basketball games for many years and coached powderpuff football during his girls’ high school years. He would joke the girls were rougher and tougher than the boys. He was highly honored to serve as grand marshal of the homecoming parade a few years ago. For many years, Jim and Virginia attended every Boise State home football game and he was often seen wearing his Boise State Broncos cap (to annoy his Vandal friends). In recent years, Jim became a Jerome High School wrestling fan to support his great-grandson, Zeke. He often talked about the wrestling boys like they were family.

Jim was proud of the fact he taught both of his daughters, his four granddaughters and his oldest great-granddaughter to drive. He got a kick out of telling the girls that riding with them as beginning drivers was scarier than base-jumping off the Perrine Bridge.

For many years, Jim and Virginia wintered in Las Vegas and Blythe, eventually purchasing a place in Florence, Arizona, after their retirement from farming in 1983. He loved his winters “down south“ where he could golf every day with his buddies.

Since Virginia’s passing in 2017, Jim spent his days golfing with Don Williams, fishing with his brother Ed, playing cards with Loren Herzinger and the bridge ladies, and hanging out with his cronies at the Corner Merc and Buhl McDonald’s.

He passed away on April 10, 2020 (Good Friday) at St. Luke’s Magic Valley Hospital after suffering a heart attack.

Jim is survived by his brother, Edward Wheeler of Castleford; and two sisters, Bonnie Barsness and Alma Hursh; his daughters, Nancy (Lee) Glaesemann of Twin Falls and Janet Haley of Wendover, Nevada; his granddaughters, Jamie (Dallas) Williamson of Jerome; Carly Hill of Boise; Nicole (Brett) Hudson of Jerome; and Holly (Jeff) Young of Grover Beach, California; his great-grandchildren, Kynzi, Ezekial and Gavin Williamson, Olivia and Jaxon Bezdicek, Hayden Hudson, and Ella Rose Hudson expected in June; as well as many, many nieces and nephews.

He was preceded in death by his parents; his wife of 65 years, Virginia; his brothers, Vernon and Allen; and his sisters, Lenore and Leona; and son-in-law, Terry Haley.

A special thank you to the Blick family, David Smith, the Kinyon brothers, Christy Bridges, Terry Edson, Doug Welch, Frank Pearson, the Castleford QRU, and many others who looked out for him.

A memorial service will be held later. In lieu of flowers, the family requests memorial contributions be given to the Castleford QRU.

To order memorial trees or send flowers to the family in memory of Jim Wheeler, please visit our flower store.