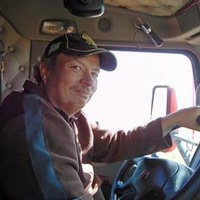 John E. Peterson, 51, of Buhl, Idaho, passed away at home surrounded by family, of complications from cancer, on August 5, 2017.

(Written by John) John was born Oct. 23, 1965 in Twin Falls to Ralph and A. Jean Peterson. He graduated from Buhl High School in 1984. In 1988, he married his High School sweetheart Cindy Zambic. To this union was born two wonderful sons, Ryley John and Matthew Edwin. John and Cindy later divorced.

John started working at the family business as soon as he got his daylight drivers license at age 14. His mother, Jean rode along with him to deliver cattle in the bobtail. Right out of high school he started driving the semi with a trailer.

In 2001, John's father passed away and John and his mom continued the family business. In 2009, John took over that business with the help of his 2 sons. It continued to prosper up until his diagnosis. In 2010, John met his soulmate Mary Bess. John and Mary enjoyed many adventures around the State in a semi or car.

John is survived by his Mother, A. Jean Peterson; two sons, Ryley (Shanna), and Matthew; one grandson, Aydin; many Aunts, Uncles and Cousins and his life companion, Mary Bess.

John was preceded in death by his Father, Ralph Peterson; numerous Uncles, Aunts and grandparents on both sides.


Mary and John's family would like to thank Dr. Dan Nofziger and the staff at Hospice Visions, especially his nurses Steven and Joe who helped to make him comfortable. Pastor John, thank you for your comforting words.

In lieu of flowers, John requests donations be made at Farmer's Bank for his youngest son Matthew's college education.

A funeral service will be 10 a.m. Thursday, August 10, 2017 at the First Christian Church (1005 Poplar St.) in Buhl. Interment to follow at Buhl's West End Cemetery. Funeral arrangements are under the direction of Farmer Funeral Chapel in Buhl.

To order memorial trees or send flowers to the family in memory of John Peterson, please visit our flower store.