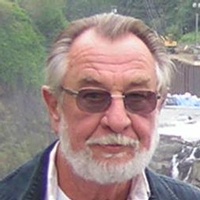 Joseph Fount Warren, 74, a resident of Filer, Idaho, died 25 January, 2017, after an extended illness.
Joseph was born on 5, September, 1942 in Bliss, Idaho, the son of John Henry Warren and Olive Ellen (Frost) Warren. His childhood days were spent in the country near Hagerman near the Malad Dam on the family farm with his siblings Wanda Florence (Warren) Thompson, John Henry Warren Jr. (Jack), and Idalee Warren (Hargraves-Hursh).
Joseph is survived by his wife, Alice Lorraine (Neusbaum) Warren, his siblings Wanda, John (Jack), and Idalee, and half-sister Rebecca Charlene (Warren) Kethcart. He is also survived by his son, Joseph Fount Warren Jr. and his wife Cindy, his grand-daughter Elisa Faun Warren, and his great grandson, Axton Liam Warren McConnell.
Joseph F. Warren was honorably discharged after four years of active service with the United States Navy as Naval Service Yeoman Third Class. During his service from 1959 through 1963, Joseph was stationed in Moffett Field California with the Attack Squadron 125, transferred to the NAS Lemoore, California, and from there to the Naval Air Station, Agana, Guam, attached to the Administrative Department of the Ships Company during the Typhoon Karen Crisis.
Joseph made his career as a printer, and print manager. He enjoyed the attention to detail required to prepare the artwork and materials for printing, and the teaching and training of operators. His career in printing spanned from coast to coast opening facilities for Sir Speedy Instant Print. He also spent a great deal of his printing career in California, Oregon, and Idaho. After retiring a few years ago from a print shop in Twin Falls, he enjoyed quiet time in his home outside of Filer with his wife Alice.
He was a proud American and longtime supporter of the Disabled American Veterans, and other veteran support groups. His interests included history, reading and gardening.
To honor his wishes, the family will gather in the spring to inter him near his parents John Henry Warren, and Olive Ellen Frost Warren with a graveside service. The family requests that any donations or memorial funds be used to help support veterans in his honor.

To order memorial trees or send flowers to the family in memory of Joseph Warren, please visit our flower store.