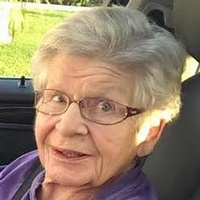 Josephine "Jo" A. Caughey, 91, passed away peacefully Monday, June 15, 2015, at her home in Huntington Beach, California, joining her husband Lyman who passed in 2007.

Jo was born in Portland, Oregon on Valentine's Day, February 14, 1924, to Joseph and Theresa Bachman. The family eventually settled in Southern California, where Jo graduated from Narbonne High School in Lomita. During the early years of World War II, she worked for Dokes Aircraft Company, a supplier of airplane components for the war effort. It was there she met the love of her life Lyman. They were married April 15, 1944, at The Church of the Nativity in Torrance, California. Later that year, Lyman enlisted in the U.S. Army and was stationed in Japan.

After the war, Lyman and Jo moved to Filer and then Buhl. Over the years, she worked part-time at Bean Growers and Green Giant, but spent most of her time and effort raising the four Caughey boys. Jo loved cooking, baking, and sewing, and later added QVC shopping to her hobbies. After Lyman passed away, Jo moved back to the warmer climate of Southern California with her pesky tuxedo cat Sylvester, and became an avid bunco player and Wii bowler. Her greatest joy was her family and she cherished visits from her sons, grandkids, great-grandkids, and friends.

Jo was preceded in death by husband Lyman, sisters Ann and Lucille, and brother Leo. She is survived by her four sons, Jim (Leann) Caughey of Buhl, Bill Caughey of Elko, Nevada, Bob (Brenda) Caughey of Troutdale, Oregon, and Joe Caughey of Huntington Beach, California, six grandchildren, Tobias, Sadie, Kelsey, Jason, Jennifer and Jessica, eight great-grandchildren, two brothers, Ted and David, many nieces and nephews, and the much older but still pesky Sylvester.

Peace be with you, Beloved Mother, Gramma, Great-Gramma, sister, aunt, and friend. Love, hope, and faith.

To order memorial trees or send flowers to the family in memory of Josephine Caughey, please visit our flower store.