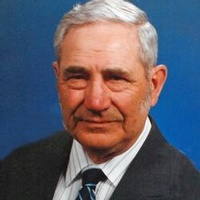 Lenard was born July 19, 1923 to Alvin and Mary Lehman Easterday and raised in Eustis, Nebraska where he helped on the family farm.

Upon graduating high school, he met and married Lorene Buehner and started farming on the Lehman farm. In April 1945 he was drafted into the U.S. Army. Lorene and their first son LaRay followed Dad to Fort Sill, Oklahoma for basic training. Upon Dad's deployment to Berlin, Mom and LaRay returned to Grandpa Easterday's farm in Nebraska, where Ronnie was born. Lenard was discharged from the Army in 1946 and returned to farming on the Lehman farm. Another son Elden was born in 1948. In the fall of 1948 the family moved to a farm West of Buhl and started picking rock. Dad and Mom lived on this farm for 66 years adding three more children to their family, Alvin, Christine and Mary.

In the 1960's Dad and his son's developed a new land in the Blue Gulch area and for many years, were grain and potato farmers. They also raised and milked dairy cows. Dad was a talented equipment fabricator. He designed and built 2-12 row bean planters. Dad could be found most days in the winter working and repairing farm equipment in his shop. He could fix almost anything.

He was always willing to help neighbors chop corn, rake blown beans or whatever work needed to be done. Dad loved to be working in the dirt. He would come home covered in dirt and mom would take him outside and brush him off with the broom.

Dad was an active member of the community of Christ Church and attended the week before he passed away. He loved to go to listen to LaRay preach.

Dad had a huge heart. He took care of his wife for 9 years, until her death on October 8, 2015. Every Saturday for the last nine years dad could be found looking for Mary and Christine to come over and make his day. He always hugged us and told us how much he appreciated our help.

Dad, we will miss all your kind hugs, your loving smile, and your always listening ear. We will miss our Saturday ice cream and donuts with you, but we have the assurance that you and mom are now walking hand in hand with Jesus in Heaven. No more pain, no more tears.

A funeral service and celebration of life will be held at 11:00am Tuesday, November 24, 2015 at the First Christian Church in Buhl, with burial to follow at the West End Cemetery. A viewing will be one hour prior to the service at the church. Funeral arrangements are under the direction of Farmer Funeral Chapel of Buhl, ID.

The family would like to give a heartfelt thank you to Hospice Visions, Hazel Easterday and Jordana Bryan for all their tender loving care given to our father in his last days.

To order memorial trees or send flowers to the family in memory of Lenard Easterday, please visit our flower store.