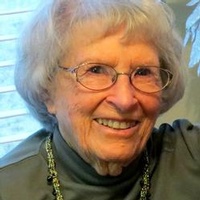 Loraine Reese
February 29, 1924-February 9, 2015
Castleford
Loraine Fisher Reese, age 90, of Buhl and formerly of Castleford, passed away Monday, February 9, 2015, at St. Luke's Magic Valley Medical Center.
Loraine was born February 29, 1924, in Oasis, Utah, to Lou Gene Walter Fisher and Spicy Ann Buckalew. Loraine liked to joke that since she was a leap year baby, she never grew old. She was the last child to be born in the family of six children. She had three brothers and two sisters. After her family found life in the Utah desert unsuitable for farming, they moved to Buhl. Loraine attended school there and graduated from Buhl High School. It was at this time that she met her husband-to-be, Art Reese, at a dance in Buhl. They have danced life's dance for seventy-two years since their marriage March 8, 1942, in Elko, Nevada.
The first year Art and Loraine were married, they moved thirteen times. They found a special piece of ground southwest of Castleford that became their home and the center of their lives. There, a hard worker, Loraine worked in the fields alongside Art, cooked meals for threshing crews, irrigated for Art while he took a fishing or flying break, and raised three children.
Besides being an amazing wife, Loraine was an artist who was not afraid to experiment with any medium. Accomplished in oil and acrylic painting, she was a founding member of the Magic Valley Art Guild. She won several blue ribbons and Best of Show at the Twin Falls County Fair. As Loraine became interested in fiber arts, she learned to take raw wool through all the stages from carding to spinning to dyeing to weaving on the loom to the final product of sewing a garment. She was a devoted member of the Snake River Weavers. Her many creations, from homemade greeting cards to colorful stuffed animals, became treasured gifts to her family and to special friends and helpers for whom she was grateful. Photography grew to be another passion. Loraine's artistic vision and creative spirit were evident in her flower gardens and the scores of personalized touches found throughout her home.
Much of her artistry was inspired by her adventures in the outdoors. Loraine and Art loved a good adventure and traveled often. Their trip to Alaska was a highlight, and they explored all the routes they could find on their visits to their daughter Sue in the Midwest. The Fairfield and Jarbidge areas were favorites for camping and trail riding. Loraine rode her own trail bike on trails that would make one gasp. They spent countless winters in Quartzite, Arizona, with their many friends from Castleford. Their travels afforded Loraine many opportunities to partake in her favorite pastimes of bird watching, fishing, riding motor scooters, snowmobiling and flying with Art.
Among Loraine's other interests were reading, bridge, genealogy, challenging Art to a game of checkers, and caring for the creatures just beyond her porch. She loved a good mystery. She was a member of the women's bridge clubs in Castleford. She researched and compiled an extensive history of both her and Art's families. Loraine also took joy in keeping the hummingbirds and wild kittens well fed. Her hands were forever involved in one project or another.
Raising her family was a priority. Loraine believed in letting her children develop their own gifts and talents. She was a nurse when diabetes struck her son, she taught her daughters to cook and sew, and she rejoiced over the grandchildren and great-grandchildren who came into her life.
Loraine developed many beloved friendships through her interests and travels. She enjoyed learning from others as well as sharing her own knowledge. Loraine was an inspiration to all those around her.
Loraine is survived by her husband, Art of Twin Falls; children, Sue (Roger) Carter of Springfield, IL, Jeanette (Steve) Wills of Twin Falls, Ted (Linda) Reese of Twin Falls; grandchildren, Sally Carter (Todd Gross), Tim Carter, Jamin (Leslie) Wills, Delena (Vincent) DiBlasi, Jason (Krista) Reese, Jenny Reese, and five great-grandchildren.
Loraine was preceded in death by her parents, and her brothers Lotus Fisher, Howard Fisher, and Henry Fisher, and her sisters Sarah Watson and Hattie Gorman.
A Memorial Service will be held Monday, February 16 at 11:00 a.m. at the Farmer Funeral Chapel in Buhl, Idaho, with Steve Wills officiating. Lunch will follow at the Moonglo Retirement Center in Buhl.
Arrangements are under the direction of the Farmer Funeral Chapel. (130 Ninth Ave. North, Buhl, Idaho.)
Donations in Loraine's name may be made to the Castleford Quick Response Unit, P. O. Box 682 Castleford, ID 83321.
Heartfelt thanks go to Dr. Camille Smith of Family Health Services and the ICU unit at St. Luke's Magic Valley Medical Center for their loving care.
How beautiful life is-how precious!

To order memorial trees or send flowers to the family in memory of Loraine Reese, please visit our flower store.