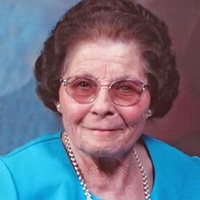 Lorene Irma Easterday, age 91, passed away October 8, 2015 at her home in Buhl, ID.
Lorene lived a long life of loving dedication and hard work for her husband, family and friends always with her warm smile and loving, open heart. Lorene was a dedicated praying wife and mother, always concerned for her family and friends. She walked with and had a close relationship to her Lord and Savior. She had the calming Holy Spirit with her up to the minute she left this earth.
Lorene and her twin sister, Irene, were born on November 3, 1923 to Christian and Leah Buehner of Eustis, Nebraska. A second set of twins were born five years later, Dorothy and Raymond. Lorene grew up on a farm west of Eustis, Nebraska milking cows by hand, while attending a country school until she started high school in Eustis. She graduated in 1942 and married Lenard Dean Easterday on March 14, 1943. They settled down and started farming in Eustis, Nebraska where their first son, LaRay, was born in 1944. In the spring of 1945, Lenard was drafted into the army, which relocated the small family to Lawton, Oklahoma. When Lenard was sent overseas, Lorene moved back to Eustis to live with Lenard's parents. While Lenard was overseas, their second son Ronald was born in 1946. After serving, Lenard came back to Eustis to begin farming again, and a third son, Elden, was born in 1948. That fall they decided to move to Idaho onto a farm west of Buhl where three more children were born, Alvin in 1954, Christine in 1959 and Mary in 1961.
Lorene raised bum lambs and thousands of calves and chickens. She grew a beautiful garden and loved to can absolutely everything she could get her hands on. Lorene and her son Ronald managed the family dairy for many years, working side by side. She was always found doing something for someone else, never thinking of herself and always concerned for her family and friends, providing meals for anyone in need or just a listening, loving, caring ear. Lorene continued to work on the family farm and dairy until they retired in 2003.
Lorene was a very active member of Community of Christ Church in Buhl, and loved being involved there. She taught Sunday school, gave morning devotions, and anything else that was asked of her. She also enjoyed being a member of the Lady's Deep Creek Club.
Lorene was survived by her husband of 72 years, Lenard, five children, LaRay (Janet), Elden (Hazel), Alvin (Elicelda), Christine (Dennis), Mary (Steven), 18 grandchildren, 28 great-grandchildren, and four great-great-grandchildren.
She was preceded in death by her mother and father, two sisters, one brother, one son and one grandson.
We will miss your kind spirit, your beautiful warm smile and your loving, caring, listening ear, but we know you are in Heaven celebrating and laughing with your family and loved ones.
The funeral service and celebration of life will be held at 11:00 a.m on Tuesday, October 13, 2015 at the First Christian Church in Buhl with burial to follow at the West End Cemetery. Funeral arrangements are under the direction of Farmer Funeral Chapel of Buhl, Idaho.
The family would like to give a heartfelt thank you to Hazel Easterday, Visions Hospice and Jordana Bryan for all their tender loving care given to our dear mother, and to our father for his many years of care for Mom.

To order memorial trees or send flowers to the family in memory of Lorene Easterday, please visit our flower store.