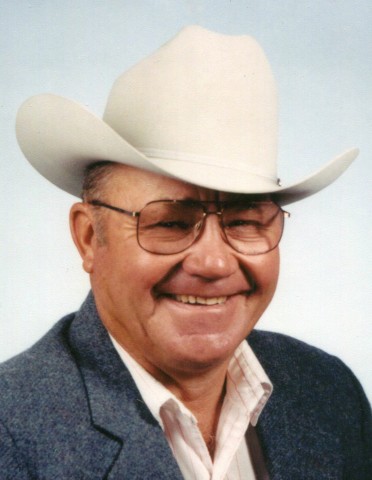 Lyle was born October 2, 1936 in Ainsworth, Nebraska to parents Jerry Eugene “Gene” and Elsie Mae Gruenberg Masters.  He moved to Buhl at the age of four with his parents and two older sisters, Marcella Masters Askew and Vivian Masters Daiss.

Too young for school when he moved to Buhl, Lyle tagged along with his father to livestock and farm sales.  When told to play outside, he stood on a tipped-over wash basin behind the barn and would jibber-jabber auctioneer style.  Gene and Elsie’s livestock were “sold” countless times to crowds of imaginary buyers.

He attended Buhl High School, graduating in 1954.  Following graduation Lyle attended the Reppert Auction School in Decatur, Indiana prior to enlisting in the U.S. Navy where he served for four years.  During his time in the Navy he met, and married, Arlene Larm.  They had three children, Laurie, Jerry, and Cindy.  He later married Lela Robertson in 1970.

Lyle’s first farm auction was on February 19, 1960.  His sister, Vivian Daiss, managed the auction paperwork from the front seat of her car.  Shortly thereafter, Cal Harper joined Lyle as his first auction clerk and partner in the business.  In 1968, Lyle and Gary Osborne of Gooding, partnered together to make good things happen for other people with farm, household, antique, collectibles and estate sales.  In 57 years of service to the people of Southern Idaho, Masters Auction Service conducted over 6,800 auctions, more than any other auction service over the same time period.  Additionally, Lyle led livestock yard auctions for more than thirty years, first at Ranchers Auction in Twin Falls, ending with Producer’s Livestock in Jerome.  Until his mid-seventies, Lyle also operated a 200-acre, self-contained cattle operation.  He fed as many as 500 stocker calves a year, while raising registered quarter horses.  Lyle was inducted into the Southern Idaho Livestock Hall of Fame in 1992.

When he wasn’t working, Lyle volunteered.  He was a Shriner, a Mason, a Rotarian, and a founding member of the West End Mens Association.  He announced tractor pulls, parades, and local football games.  Individually, and with the boys at Masters Auction Service, Lyle conducted countless benefit auctions in the community for churches, schools, and civic groups, most memorably the annual 4H and FFA auctions at the Twin Falls County Fair from 1959 until 2015.  Twin Falls County Fair Board honored Lyle by dedicating the livestock sales barn to him in 2009.   When asked why he volunteered Lyle said, “When you live in a community, you should try to make things better for other people in the community.  Through your efforts someone may benefit. You don’t always know when, or who, so you just do.”  To our knowledge, he never refused an auction request and always called his buyers by their names.  His last scheduled event, the 2017 Castleford Men’s Club Auction, was conducted by Gary Osborne and the Masters Auction crew. Lyle had a stroke that morning and insisted he could still put his boots on and go -while riding in the aid car - without sirens or lights - to the hospital.  Simply put, Lyle lived to sell anything at auction.  He loved all of you who attended over the years.  He hopes everyone he met in this life knows they mattered to him.  He felt lucky to live with you in the Magic Valley of Southern Idaho.

We all wish to extend our heartfelt thanks and appreciation for the wonderful staff at Evergreen Assisted Living Place.  Everyone treated him like family and took wonderful care of him for the past four years.

Finally, Lyle contracted Covid-19 last fall.  He survived but lost several of his fellow residents at Evergreen.  His family wants to provide all of us an opportunity to share in the celebration of Lyle’s life.  Because of this, we ask that you respect our wishes and wear a mask while in attendance at the services.

Memories and condolences may be shared with the family on Lyle’s memorial webpage at www.farmerfuneralchapel.com.

Going, Going but not Gone, nor Forgotten from our Memories.

To order memorial trees or send flowers to the family in memory of Lyle Masters, please visit our flower store.