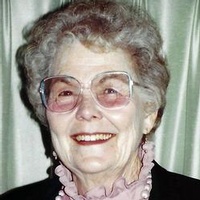 Marjorie Parmley was called home to heaven October 13th 2017 at the age of 95.

Marjorie (Marge) M. (Owensby) Parmley, was born October 28, 1921, in Shamrock, Oklahoma, to James L. Owensby and Blanche I. Owensby. Marge out lived her 3 brothers and 2 sisters.

In 1931 her family moved to Paonia, Colorado, where they raised fruit and livestock. They moved to another house where they raised hay, grain, sugar beets and beans for sale and to use for food, helping them survive the Depression. During her senior year of high school she worked in a boarding house waiting tables and helped with the cooking and cleaning. Marge graduated from Paonia High School in 1939.

Marge asked Jesus Christ to be her Lord and Savior when she was 17 years old and her faith in Christ sustained her through many painful trials, both physical and emotional. For years she was a member of Potter Valley Bible Church where she taught and shared her faith. She was currently a member of Kimberly Christian Church.

Her life spanned from the early 20th century, where she lived without many comforts such as electricity and plumbing in their home, using coal for heat. She traveled by walking, horseback and Model A Ford.
Marge married Francis E. Parmley June 16, 1941. They lived in Colorado and California where they worked on cattle ranches for many years, then retired and moved to Idaho. Four children were born to them, two daughters and two sons. She was an exceptional mother, homemaker and her children are blessed.

After moving to Idaho, Marge worked for American Micro Systems for ten years. She spent several years tutoring prospective citizens in reading and other skills. She also worked and traveled with Wycliff Bible Translators for a short time. She was a very intelligent, and loving woman.

She was an accomplished seamstress and enthusiastic square dancer. She enjoyed painting scenes she was familiar with and places from her memory until her eye sight failed. Even though blind she was able to stay in her home and take care of herself due to her strong, courageous and thankful spirit.

She was preceded in death by: her parents, 3 brothers and 2 sisters, husband, son-in-law Cecil Hopwood, grandson Daniel Southworth and grand-daughter in-law Stephanie Southworth.

To order memorial trees or send flowers to the family in memory of Marjorie Parmley, please visit our flower store.