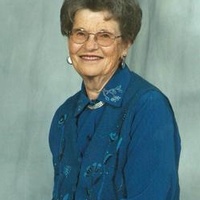 Martha was born November 7, 1921 in Wendell, Idaho to Mike Kappel and Anna Ralston Kappel. She died March 21, 2015 in Caldwell, Idaho. She attended twelve years of school in Wendell and graduated in 1939. She attended Albion State Normal School and graduated in 1941. She taught Elementary School in Buhl, Burley, Jerome, Filer, and Castleford. In 1944, Martha married Floyd Bowers on May 24 at Wendell. They moved to Castleford and she taught in Castleford for 24 years. She graduated with a Bachelor of Arts from Idaho State University.
Martha was a Charter member of Wendell Bethel of Job's Daughters and past honored queen. She was a Sixty plus year member of Star of the West Chapter, Order of Eastern Star (Wendell). In Castleford she was a member of the United Methodist Church, Grandmothers Club, Pinochle Club, and several Bridge Clubs.
Martha enjoyed family, reading, bridge, crossword puzzles, travel, being with friends, pets, and cooking.
Martha is survived by a wonderful son, Mike, daughter in law Ann, and precious grandson Edward. She was preceded in death by Floyd in 1991, parents, and a granddaughter.
A funeral service will be 11 a.m. Saturday, March 28, 2015 at the Castleford United Methodist Church. Interment will follow at the West End Cemetery in Buhl. Funeral arrangements are under the direction of Farmer Funeral Chapel in Buhl.
Any memorials should be addressed to the Castleford United Methodist Church or the Castleford Quick Response Unit.

To order memorial trees or send flowers to the family in memory of Martha Bowers, please visit our flower store.