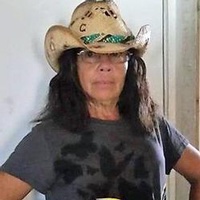 Mary Ann Loftis, 53, of Hollister, passed away August 24, 2016 from injuries sustained in a car accident.
Mary Ann was born in Rupert, Idaho and spent most of her early years in Wendell, Idaho. During her life she worked at various jobs, including; driving truck for Rangen's and Clear Springs, and working at the stockyards in Twin Falls and Burley. She had two daughters, Debra and Sarah. Mary Ann loved to go fishing, boating and spending time in the outdoors.
She was preceded in death by her mother, Sarah Wolfe and father, Reid Hayes.
Mary Ann is survived by her daughters, Debra Watson and Sarah Watson; six grandchildren, Chelesy Watson, Tyler Watson, Brandon Hubbard, Andrew Williams and Dameon Williams; brother, Butch (Shawna Orr) Harms and sister, LaDawn Alshami.
A memorial service will be held at 10:00 a.m. Thursday, September 1, 2016 at Farmer Funeral Chapel in Buhl.

To order memorial trees or send flowers to the family in memory of Mary Loftis, please visit our flower store.