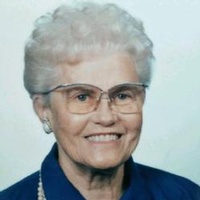 CASTLEFORD--Mary Alice Quigley, 95, passed away peacefully at her home sweet home on her farm in Castleford. She has joined her husband Clinton in the arms of her beloved Lord as of Sunday, December 4, 2016.

She was born June 16, 1921, to Leon and Mary Peck in Buhl, Idaho. Complications during childbirth took her Mother, and she was raised by her Aunt Jannie and Uncle Ernest Peck in Filer. She graduated from Filer High School, followed by a 2 year teaching program at Idaho State University, where she later returned to receive her Bachelor's Degree. She taught in Twin Falls, Boise, Buhl, and most of her years were spent in 2nd grade at Castleford, where she retired in the late 1970s. Teaching and her students brought her great happiness.

She met the love of her life, Clinton W. Quigley, at the Twin Falls County Fair, and they were married on Dec. 18, 1947 in Mesa, Ariz. They moved to the Quigley Castleford Farm after the wedding, where she then lived, laughed, and loved for the rest of her 70 years. It was there she raised her two daughters, Linda Jill and Mary Janaye. Her children were her pride and joy!
Mary was a vital part of the Castleford community. She was a member of the Castleford Methodist Church, Grandmother's Club, Bridge Club, and Pinochle Club. Her passions included playing the piano, music, gardening and flowers, reading, cooking, and drawing, all alongside one of her many treasured Boston Terriers. Her favorite trips were in a motorhome, fishing with Clinton, winters in Lake Havasu, or at the family cabin in the Sawtooth National Forest. Most of all she loved sharing stories, wisdom, laughter, and faith with her friends and family. Her strength in the Lord, sense of humor, and wit will be missed by all who knew her.

Mary is survived by daughters, JiIl Varin and Janaye Jones; grandchildren, Janie (Brandon) Swanson, Katie (Lee) Weller, Will (Layne) Varin, and Christina Jones; beloved great grandsons, Jayden and Jackson Weller, as well as many Castleford friends and family. She has now joined her dear husband Clinton, sister Ruth, parents, and many others.

The funeral will be held 2:00 p.m. Friday, Dec. 9, 2016 at the Castleford United Methodist Church, with graveside to follow at the West End Cemetery in Buhl. The funeral arrangements are under the direction of Farmer Funeral Chapel in Buhl.

To order memorial trees or send flowers to the family in memory of Mary Quigley, please visit our flower store.