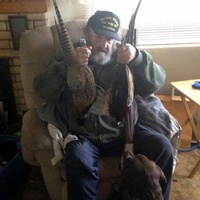 Neal Alan “Grizzly Bear” Barigar, 70, of Buhl died on June 25, 2018 at St. Luke’s Magic Valley Medical Center. Griz was born on April 25, 1948 in Twin Falls to D.A. “Al” and Marjorie Barigar. His earliest years were spent on the family’s farm in the Fairview area with brother Daryl joining the clan in 1950 and Lee in 1952. In spite of severe allergies diagnosed at a young age (he was allergic to everything on the farm from dust to animal hair to pollen), Griz pitched in where he could and became an accomplished irrigator.

Griz attended first grade at the Fairview Country School – the last class to be held there – before moving on to Buhl schools to complete his education. He excelled at football and basketball during his school years, often being the high point scorer on the basketball team. His height really helped him with that. He graduated from Buhl High School in 1966.

Griz worked as an irrigator on Green Giant’s company farms in the summer after high school before heading to Moscow to attend the University of Idaho. Halfway through his sophomore year, he returned to Buhl to work for Green Giant. In 1968, he was drafted by the United States Army and served a hitch in Vietnam in 1969-70. While not an ideal situation, Griz served faithfully and honorably rising from Buck Private to Staff Sergeant and Platoon Leader, and completed his obligation to his country.

After his return to the United States, he connected with friends living in the San Jose, California area for several months and on the “Big Island” south of Murphy’s Hot Springs in northern Nevada. He worked again for Green Giant running the old two-row corn harvesters and also at local fish hatcheries on the harvest crew, scooping up rainbow trout with his hands every day.

When their brother Daryl died in 1975, Griz and Lee returned to farm with their dad. Griz continued to handle the farming duties after Al’s death until finally leaving the operation to pursue travel to Canada and work in Alaska. He ultimately returned to the Magic Valley picking up jobs here and there including a final return to Green Giant harvesting sugar snap peas and sweet corn.

Griz spent his retirement years always surrounded by friends (and his loyal dogs) hunting, fishing, and exploring the high desert. He was a domineering character with a heart of gold who has headed off for his final hibernation.

He is survived by his brother Lee Barigar; nephew Shawn (Camille) Barigar and great-nephews Brock Nickel and Xander Barigar; sister-in-law Maggie Himmelberger (Bob) and niece Robyn Cheney (Merrill) and their son Andy. He was preceded in death by his parents and brother Daryl.

A graveside service will be held at 2:00 p.m. Tuesday, July 3, 2018 at the West End Cemetery followed by a celebration of his life at Mimi's Flowers & Saddlehorn Event Center. Arrangements are under the direction of Farmer Funeral Chapel in Buhl.

To order memorial trees or send flowers to the family in memory of Neal Barigar, please visit our flower store.