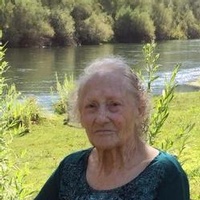 Polly was born in Bryarly, Texas Dec. 20, 1926. She and her family moved often when she was a child. She eventually settled in Livermore, California and spent many of her young adult years there.

In 1956, she married Clayton "Ted" Alm. In 1984, Polly and Ted moved to Buhl, Idaho to be near her family and help care for her Dad. She spent the rest of her life living in Buhl.

Polly was raised Pentecostal and was a devout Christian. She tended to her rose garden and enjoyed sewing at home. She loved to spend time with grandchildren and great-grandchildren. Her favorite activity was to go fishing. She loved to go to the mountains and camp. She would spend her time near the water, hoping to catch a big trout or two.

She was preceded in death by her parents, Avery and Rosey Allen; husband, Clayton "Ted" Alm; brother, James Allen and granddaughter, Michelle Sullivan.

A funeral service will be 2 p.m., Thursday, May 19, 2016 at Farmer Funeral Chapel in Buhl. A viewing will be from 1 - 2 p.m. prior to the service. Condolences for the family may be left at www.farmerfuneralchapel.com.

To order memorial trees or send flowers to the family in memory of Oma Allen-Alm, please visit our flower store.