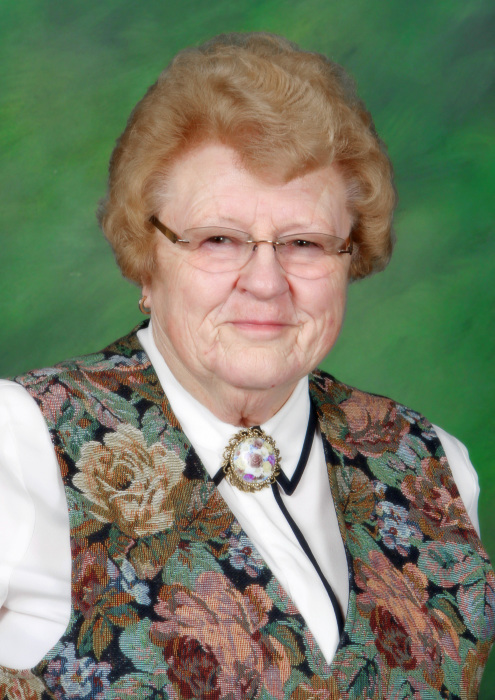 Early in the morning of July 6th, 2019, Peggy Joyce Fawcett crossed the threshold just in time to rejoin her mother, brother Bud and father at the breakfast table for one of her favorite morning meals of a cup of hot tea, a hard roll from Erb’s bakery smeared liberally with cold butter, and a bowl of fresh peaches.

Peggy began her life’s journey on December 15, 1933 as the first-born child of Paul and Bessie Duffy.  She was born high on a hillside near Orofino, Idaho, overlooking the valley of what would become the Dworshak Reservoir.  Following jobs during the depths of the Great Depression, the Duffy family moved several times finally landing in Buhl, Idaho, where Peggy was joined by three siblings.

Growing up in the McCollum neighborhood of Buhl, she met Kenneth Fawcett, a handsome devil who had just returned to Buhl from Army service.  She and Kenneth soon became an item and married on June 10, 1950.  The marriage was blessed over the next ten years with four ornery, but good-hearted children.

Once the kids were old enough, Peggy began work outside of the home by sorting apples in the fall and later processing trout.  After injuring her back, she attended Twin Falls Business College obtaining a bookkeeping degree.  She then began her professional career as the secretary for the Buhl Junior High/Middle School.  For 28 years, Peggy kept the students pointed in the right direction and spoiled the faculty and staff with her delectable homemade pies, cakes, sweet breads and other yummy goodies.  In 2000, she retired from the School District and began pursuing full time her passion for sewing and machine embroidery.

Peggy also loved playing in the dirt, which was evident by the beautiful roses, zinnias, begonias and other flowers she grew.  She also continued treating her family with her fabulous cooking and amazing desserts at holiday gatherings.

Surviving Peggy is her loving husband of 69 years, Kenneth; her devoted 4 children, Priscilla Jenks, Patrisha Fawcett-Scheer, Paula Hart-Blaszkiewicz, and Kenneth Jr.; her sister, Sally Eggleston and brother, Patrick Duffy.  She is also survived by six grandchildren; 15 great-grandchildren and two great-great grandchildren.  She will also be missed by her many nieces, nephews, cousins and the many friends she made throughout the years.

She was preceded in death by her father, Paul J. Duffy; her mother, Bessie Duffy; and brother, Paul L “Bud” Duffy.

Peggy’s family requests that in lieu of flowers that you please honor her memory by creating your favorite dessert or planting a beautiful flower for your loved ones to enjoy.

The family would also like to thank her many wonderful caregivers throughout her later years.

To order memorial trees or send flowers to the family in memory of Peggy Fawcett, please visit our flower store.