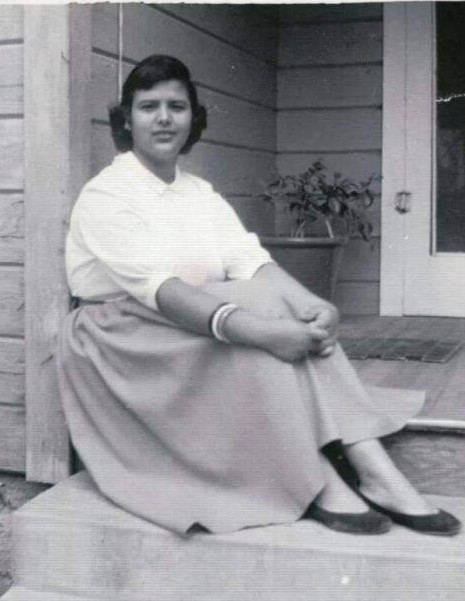 During Pat’s youth she tended to her younger siblings, helped her mother and grandmother with housework and cooking, worked on a chicken farm, as well as helped her father in the orchards that he managed. Pat’s dad taught her many life skills while she was young such as how to work on cars, change the oil and more. She also cared for her dad while his health declined until his passing.

Pat met Ernest Chavez and they married January 5, 1958, in Casa Blanca, California. To this marriage was born Inez and Gilbert. Pat had a big heart, opening her home to other children, being a foster parent. In September 1969 Pat adopted her last foster child, Carol at the age of 2. Pat and Ernest later divorced.

Pat met William “Bill” Pryor in California. They were married July 6, 1974. This was the start of their blended family, adding Bill’s children Terri, Tammie, Peggy and Kevin to the picture. Pat and Bill later settled in Buhl.

Pat spent several seasons working in the honing room at Green Giant in Buhl. She made many friends while working there, specifically Carolyn McCoy, Claudine Strickland, and Etsuko Burgess. Pat and Bill also ran Ambulance 6 in Buhl for several years under the direction of Cloyce Edwards. They gave this up after Bill started on the Buhl Police Dept. Pat then went on to work at Universal Foods until she fell and suffered a broken back after which she no longer worked.

Pat enjoyed sewing and crafts. She made many clothes and toys for her children. She made Christmas wreaths and birdcages for sale. Pat was a doll collector. She had a huge collection of Barbies, and many other collectable and antique dolls and knick knacks. Pat loved making her famous Mexican dishes and feeding her family, friends, and coworkers. Pat and Bill enjoyed traveling together throughout their years. They had several trips to Washington, California, Hawaii, and other states, and some of their trips were taken on their motorcycle. They also had many trips travelling with their car clubs and attending car shows.

Pat was preceded in death by her parents; grandparents; daughter, Inez Velasquez; one granddaughter; and a few of her siblings.

The family would like to thank Buhl QRU for the many rides, and Dr. Mason, Dr. Hymas, and the staff at St. Luke’s for the care they have rendered to Pat over the years.

Donations may be made to Buhl QRU in Pat’s name.

A memorial service will be held at 11:00 a.m., Friday, April 29, 2022 at Farmer Funeral Chapel, 130 9th Ave North, Buhl. Inurnment will be held at the Snake River Canyon National Cemetery.

Memories and condolences may be shared with the family on Pat’s memorial webpage at www.farmerfuneralchapel.com.

To order memorial trees or send flowers to the family in memory of Petra Pryor, please visit our flower store.