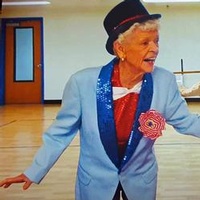 Phyllis was a natural born entertainer, singing and tap dancing from a young age. She continued both passions throughout her life, participating in many theater productions, and writing and directing her own musical. She led a group of amazing tap dancing ladies (all age 60 or older) known as the Top Hat Tappers. You would often see her doing a flap, shuffle step, ball change in the kitchen, and even in her 90's she was known to don her fishnets when given the opportunity.

Phyllis was an accomplished business woman in an era when women rarely held management roles. She managed the Idaho Falls Mall in 1970 and went on to manage several malls in the Magic Valley. Phyllis was recognized for her abilities/accomplishments when she was featured in "Who's Who of American Women" in 1977. Not only did she rise to the challenge of being a woman in the business world, but she encouraged and developed a greater sense of community by inviting local artists and craftsmen to display their creations in each of her locations.

Best of all, she was a loving daughter, sister, wife and mother. A woman with tenacity and gumption, she moved through life a bit like she drove, heavy on the gas pedal. Phyllis loved reading, golfing, and the occasional swear word. Her wit and lively laughter will be greatly missed by the family.

She leaves behind; her son Gary Patrick (Linda), daughter Karyl Edgerton (Bruce), and son Rob Patrick (Cindi) as well as generations of grandchildren who lovingly called her Grandma PP.

In lieu of services, a private celebration of life will be held by her very proud family to honor her 93 years.

To order memorial trees or send flowers to the family in memory of Phyllis Patrick, please visit our flower store.