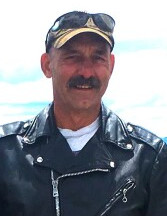 Raymond Reed McNabb Jr. was born  March 12, 1961, and passed away July 14, 2022 at his home in Buhl, Idaho. Ray, or “R.J.” as his closest friends and family knew him, was born in Wolf Point, Montana to Raymond and Alfreida McNabb. He was raised on a family farm south of Wolf Point until the family moved into town. He attended Glasgow Elementary School and Hinsdale Elementary as well as Wolf Point Middle School and Wolf Point High School until the passing of his father on March 10, 1978. R.J. then took over as caregiver for his mother and siblings.

He worked for various farms in the area until he moved to Idaho to be closer to his brothers, Donny and Bill. He worked as a welder for several years but was a jack of all trades. He was a hard worker and could always be found helping a neighbor, local business owner, or friend. He worked hard, but he played harder. His favorite hobbies were riding his motorcycle, snowmobiling, taking trips with his brothers to Montana, hunting, and spending time with his family and friends.

He was preceded in death by his wife, Lorna; parents, Raymond and Alfreida; brothers-in-law, Gary “Porky” Peltier and Chuck Hanson; as well as several aunts, uncles, cousins, and grandparents.

He will be greatly missed by all. Love you brother! Until we see you again.

For anyone wishing to donate, there is a GoFundMe setup under Ray McNabb to help with family expenses.

Memories and condolences may be shared with the family on R.J.’s memorial webpage at www.farmerfuneralchapel.com.

To order memorial trees or send flowers to the family in memory of Raymond "R.J." McNabb Jr., please visit our flower store.